China and Egypt were both winless coming into this day three contest in first round play action at the FIVB World Cup in Kagoshima, so something had to give. 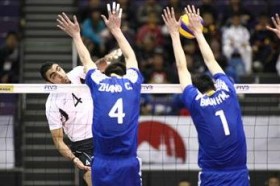 Abdelhay attacks against China in their win, FIVB

The Chinese had an 11-3 historical edge in the head-to-head, although Egypt had won their last contest in a September friendly in Dubai.

Egypt national volleyball team would take this Japan Volleyball World Cup match as well 3-0 (25-20, 25-20, 25-18), playing inspired and focuses volleyball as a difficult political situation continues at home, making them the sentimental favorite on the day.

Leading Egypt on the day was their super-southpaw Ahmed Abdelhay with 19 points, including a trio of aces. He was supported with great play by his setter Abdalla Ahmed, who took the most impressive player award for the match, contributing seven key spikes on eight attacks and setting the squad to a 67 successful attack percent. For the Chinese national volleyball team, Chen Ping was the only player to reach double-digits, notching 11 on the day. Zhang Chen was second on his side with eight

Egypt looked focused to start with their leading scorer Abdelhay firing an ace on the first point. But China would stay right with them, with Chen attacking well on the wing, delivering a spike off the block to tie at 11-11. But Egypt’s setter Abdalla Ahmed jumped in on their attack, with a hard smash to put them up 18-16. And from there it was all Abdelhay, finishing the set with five of the last seven points (he had eight in the set), including back-to-back aces, taking the set 25-20.

Egypt brought their momentum into the second, slowly edging out to a 9-6 lead, helped by a gorgeous setter dump by Ahmed early that caught China by surprise. From there Egypt took four of the next five, but had a mental breakdown after that with three errors letting China take five points unanswered, to go ahead 13-12. But Egypt regained composure late with attacks from Ahmed and Mohamed Badawy (Moneim) complementing Abdelhay, who showed some defense on a great diving dig to give his side set point 24-19. Moneim ended the second set with an emphatic smash, again 25-20.

Abdelhay helped his team ahead to start the third set, with a pair of drives putting Egypt ahead 7-4. The Egyptians weren’t especially sharp from there, but China’s service errors were epidemic mid-set, with four different players delivering serves that missed their mark, letting Egypt ahead 14-12. And that was all the advantage Egypt needed to take this match, as Abdel Latif Ahmed posted a stubborn block on Liang Chunlong to go ahead four, and later another tip at the net to close 25-18.

In Which Countries is Volleyball Most Popular?