The victory gave Iran a 2-1 mark in the tournament, while European champion Serbia slumped to 0-3. Mehdi Bazargarde (17 points) and Mohammad Mousavi (14 points) led a balanced scoring attack for Iran, which played a fine all-around game under the direction of coach Julio Velasco. Ivan Miljkovic was the focal point for Serbia, scoring a match-high 22 points.  Dragan Stankovic and Marko Podrascanin added 14 each. Pourya Fayazi was named the most impressive player of the match. 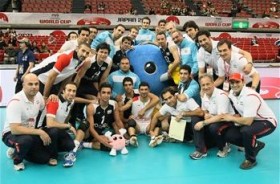 2011 Asian champions Iran pose after their great win over Serbia

Mehdi Bazargarde rose high for a spike to give Iran an 8-7 lead at the first TTO in the opening set. Miljkovic scored four early points for Serbia. A nice dink by Serbia’s Vlado Petkovic made it 9-8 for Iran. Iran ran off the next four points and Serbia took a timeout trailing 13-9. The Iranians led 16-12 at the second TTO. Down 20-14, Serbia called another timeout. When Serbia scored three straight points, Iran responded with a timeout of its own. Mousavi drilled a spike after the timeout to make it 22-17 Iran. A Serbian mistake gave Iran set point and they closed it out 25-17 on a good block at the net. Bazargarde led Iran with five points in the set.

Serbia moved out to a 5-2 lead in the second set after a strong spike by Miljkovic. The Serbs led 8-5 at the first TTO. Iran scored the first three points after the TTO to equalize 8-8. A Bazargarde block put Iran ahead 12-8 and Serbia then called timeout. Marko Podrascanin split the Iranian defense with a spike and Serbia tied the score 12-12. Serbia was in front 16-14 at the second TTO. Following the TTO, Serbia took the next three points. A Miljkovic spike made it 23-17 for Serbia and they took the set 25-18. Miljkovic led the way for Serbia with five points in the second set, while Arash Kamalvand had the same for Iran.

The third set was tightly contested early on. Bazargarde soared to smash a spike and Iran had an 8-7 advantage at the first TTO. Serbia was ahead 15-12 when Iran’s Pourya Fayazi scored on a nice dink. The Serbs were on top 16-12 at the second TTO. Iran closed to within 18-17, but Amir Ghafour then served into the net. A Miljkovic spike gave Serbia a 23-20 lead and the set appeared within grasp. Serbia clinched it 25-21 on a block by Ivan Miljkovic.

A Bazargarde block staked Iran to a 7-3 edge in the fourth set. Iran was up 8-6 at the first TTO. An Iranian error knotted the score 10-10. An Alireza Nadi spike gave Iran a 15-12 lead and they led 16-12 at the second TTO. A Miljkovic spike sailed long and Iran boosted its lead to 19-13. With a 22-19 lead, Iran took a timeout. Serbia held off a set point on a spike by Podrascanin, but succumbed on the ensuing point 25-21.

The final set was tight as expected. A Podrascanin spike tied the score 6-6 and he followed that with a service ace. Miljkovic responded with a spike to make it 7-7 and Serbia was on top 8-7 at the TTO. A beautiful dink by Dragan Stankovic made it 9-8 for Serbia. Iran fought back and took a 10-9 lead on a block by Alireza then went up 11-9 when Serbia touched a ball that appeared headed out. A spike by Bazargarde put Iran up 13-9 and Serbia then called a timeout. Iran clinched the match 15-11 on a spike by Fayazi.

The Most Unusual Volleyball Uniforms