Both teams entered the contest unbeaten. Poland defeated both Cuba and Serbia in their first two matches, while Argentina bested Serbia and Japan. Zbigniew Bartman paced Poland with 17 points, while Michal Winiarski contributed 15. Winiarski was named the most impressive player of the match. Poland showed good teamwork in the victory and capitalized on Argentina committing more unforced errors. Facundo Conte had a match-high 19 points for Argentina in the loss. Sebastian Solé added 11 for the losers. 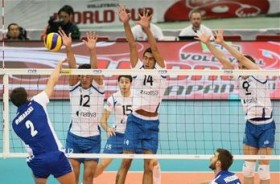 Argentina established an early 7-3 lead in the opening set and Poland took a timeout. A nice dink by Conte, who notched four early points, sent Argentina into the first TTO with an 8-3 lead. A solid pass from Sebastian Solé resulted in a spike Luciano De Cecco and an 11-3 lead for the South Americans. With Argentina up 12-3, Poland ran off five straight points to make it 12-8. A spike by Rodrigo Quiroga put Argentina up 16-9 at the second TTO. A power spike by Poland’s Bartosz Kurek made it 18-13 in favor of Argentina. Bartman uncorked a serve too long and Argentina moved within two points of the set at 23-18. Argentina summarily closed it out 25-18, with Conte scoring seven points in the set.

Poland was in front 8-5 at the first TTO of the second set before Winiarski delivered a spike to move Poland up to 10-6 as Argentina called a timeout. Piotr Nowakowski’s spike gave Poland a 14-10 edge. The Poles held a 16-10 lead at the second TTO. Conte brought Argentina within four at 20-16 with a cross-court spike, but Quiroga then served into the net. Argentina moved to set point on a receiving error by Quiroga, who tried an over the head pass but mishandled it. He then misplayed the next ball and Poland claimed the set 25-20.

Poland kept the momentum and was ahead 8-6 at the first TTO in the third set. Conte’s spike made it 11-11 as the set remained tight throughout. Poland took a two-point lead 13-11 on a block by Marcin Mozdzonek. A strong block by Argentina ended a great rally that tied it 13-13. The Europeans led 16-14 at the second TTO. Argentina equalized at 19-19 and Poland called timeout. Poland gained set point at 24-22, but Pablo Crer’s block kept Argentina in the set momentarily. Poland took the set 25-23 moments later.

Argentina grabbed an 8-6 lead at the first TTO in the fourth set. A service ace by Bartman leveled it 10-10. With Poland up 12-11, Kurek served into the net. A block by Mozdzonek gave Poland a 16-15 lead at the second TTO. A foot fault on De Cecco tied it 18-18 before a Nowakowski block made it 20-20. Poland then went in front 21-20 on a block by Kurek. Nowakowski’s spike moved Poland within two points of victory at 23-22. An error by Crer sealed the victory for Poland 25-22.

What you need to know about fighting...