Russia have looked near invincible so far in this FIVB Men's World Cup first round, and on Tuesday night they took their 2-0 into a match with a tough USA team, who were coming off a disappointing loss to top-ranked Brazil.

Russia rolled on in this match thanks to great blocking throughout, winning the first two sets easily, and displaying composure to take the third from behind, winning 3-0 (25-18, 25-18, 26-24). 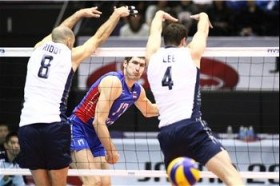 Maxim Mikhaylov led the Russians in scoring in a win over the USA, FIVB

Leading Russia on the day, as he has in all their matches so far, was Maxim Mikhaylov with 18 points. Supporting him with great defensive performances was the match most impressive player Alexander Butko who had six blocks, and Nikolay Apalikov who had five blocks. For the USA, Clayton Stanley finally found his rhythm posting 17 points in a losing effort.

The two teams went point for point early, with neither team leading by more than one until Mikhaylov drove a hard spike off Ryan Millar to edge Russia ahead 12-10. Alexander Volkov, the second leader blocker in the tournament thus far, kept us his stellar defence with a block on Matt Anderson. The USA were within one at 16-15, but Russia put up an 8-1 run marked by great attacking from Mikhaylov and Denis Biriukov (both had six in the set), and capped by a soft ace from Volkov to help close 25-18.

Russia held a slim lead to start the second, moving up two on a Biriukov smash, and then extending to four, 12-8, after two incredible blocks by Butko. An errant tip by David Lee put Russia up six, and they’d keep that margin as a Mikhaylov drive put them up 21-15, despite the USA’s best offensive efforts from Reid Priddy and Stanley. Attacks from Sergey Tetyukhin and Biriukov would clinch another relatively easy set for the Russians 25-18.

In the third, Butko frustrated the Americans up front, posting his fourth and fifth block consecutively to go ahead 8-5. But Stanley brought a block of his own to tie at 10-10. The USA captain would subsequently deliver three straight aces on an 8-1 run to go up 19-13. An incredible block by Lee on Mikhaylov put the USA in apparent control at 23-18, but Russia battled back with Butko’s sixth block bringing his side within one, and Apalikov’s fifth block drawing even at 24-all. And that was all Mikhaylov would need, as he’d ride their momentum home on a kill 26-24.