Brazil strengthened their position at the top of the FIVB Senior World Ranking – Men after their gold medal finish at the Rio 2016 Olympic Games, while world champions Poland also cemented their hold on second spot. 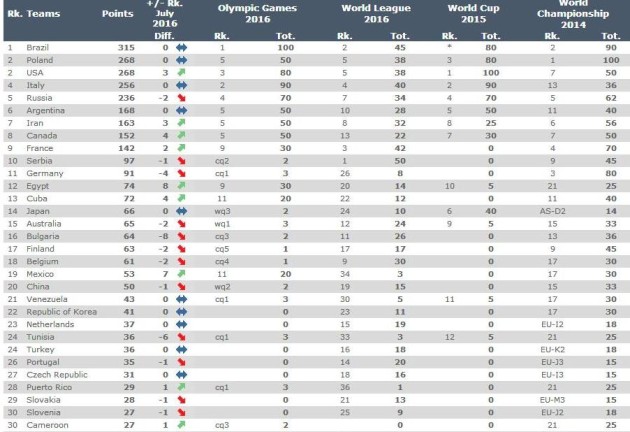 The Brazilians’ solid act in the World League earned them a silver medal in the competition; they then followed that up with a much stronger performance a month later, winning gold on home soil.

They returned to the top podium of the Olympic Games, 12 years after they claimed the same spot in Athens 2004. They got two silver medals in between these gold medal finishes at Beijing 2008 and London 2012.

The reigning world champions, on the other hand, made it to the quarterfinals of Rio 2016 before they bowed out to the United States in straight sets. The joint-fifth finish was enough to hold their grip on the No.2 position.

Meanwhile, USA moved three places up in the world ranking after they finished with a bronze medal in Rio 2016, while Olympic silver medallists Italy held on to the No.4 position.

London 2012 gold medallists Russia failed to get a medal in Rio de Janeiro, as they lost grip of the bronze medal against USA; and dropped two places to No.5

The world rankings are still messed up. So inaccurate it’s not even funny… HAHA haha