Poprad, Slovakia, November 23, 2011. In a remake of the final match from this year’s CEV Volleyball European League Slovakia beat Spain 3:1 to qualify for the semifinals of the Olympic pre-qualifier in front of a sold-out arena in Poprad. 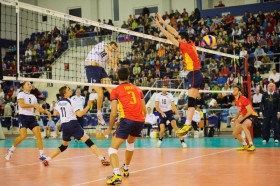 With a full house, the atmosphere was just incredible as Slovakia and Spain crossed their ways once again some four months after the final match of the European League played in Kosice this past July. Spain caught a good start, by serving well and moving up 10:5; however, Slovakia fought back to draw level at 11 with a nice spike by opposite Martin Nemec. Slovakia went up 18:15 but Iban Perez clawed back for Spain for the 19 all.

Slovakia dissipated another 2-point lead at 23:21 and Spain eventually clipped the opening set 28-26. In set 2 Slovakia started better and the score stood at 8:4 for the home side by the first technical time-out. The home team was very successful in attack and the score moved up gradually before Slovakia took home the second set 25-18. Spain set the pace 10:5 in the third set and home coach Stefan Chrtiansky opted for some important changes.

His son Stefan Chrtiansky jr. joined the game and the 20-year old spiker did perform well. Slovakia turned the score around and seized the third set 25-23. The Slovakian players maintain that good momentum, they continued to play very strong and easily took the fourth set 25-14.

“Spain minimized their mistakes and received a lot of balls in the first set. We didn’t play bad, but they played really great. After that we played more intelligently, we didn’t made that many mistakes in service and our defense was better and better. We changed the rhythm a little bit and that disrupted the efficiency of the Spanish defense” said the head coach of team Slovakia Stefan Chrtiansky.

“We expected a tough match. We know very well how strong Slovakia is at home. We played good up to the 16:12 in the third set and I don’t know why we stopped there. Slovakia got back into the match and won the third set and finally the match 3:1. We have to be ready for the next match against Austria” added the head coach of team Spain Fernando Munoz.

GP 2014: Japanese team has been announced