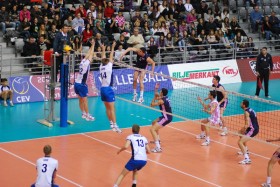 “We started the match very nervously as we know we are missing three important players. The setter who played in set 3 is still a junior but we still believed in our chances to win although we were trailing two sets down. Gasparini served well and Urnaut took very much responsibility in a close and dramatic fifth set, scoring the winning points” stated Slovenia National Volleyball team head coach Veselin Vukovic.

Andrej Flajs paced Slovenia with 16 points, with Alen Pajenk and Mitja Gasparini chipping in with 15 apiece and captain Urnaut totaling 11.

Marco Ferreira of Portugal was the top scorer of the game with 23, while Flavio Rodolfo Cruz and André Lopes added 17 apiece to the Portuguese tally.

After two close sets, Finland National Volleyball team got control of the operations in the match against the hosts of Croatia. With two wins the Finns are on top of the standings in Pool A and have already qualified for the semis. Croatia and the Netherlands will battle on Thursday for the last ticket at stake.

Igor Omrcen top scored for the home side with 22 points while Finland distributed well with Mikko Oivanen totaling 16, his brother Matti 10 and Antti Siltala finishing with 12.

Liberos, here is the drill you should...