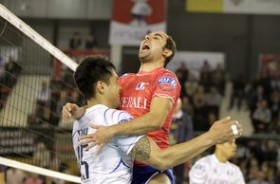 To book a spot for the semifinals as the top ranked team of Pool A in Volleyball World Cup, Japan, France national volleyball team will have to best Germany on Thursday. In Pool B the Czech Republic needed five long sets to eventually beat Latvia 16-14 at the tie-break.

The Czech volleball national team did not have it easy at all with Latvia; after claiming the opening set, they saved off two set balls for their opponents in set 2 as they were trailing 22:24, but a tie-break was played to ultimately determine the winner of this clash. Jan Stokr stood out for the Czechs with a massive haul of 34 points.

“We thought this match was going to be easier, but Latvia played extremely well, especially with their spiker Hermans Egleskalns. They made very few mistakes, so finally we are pleased with this win because it gives us the right confidence for the next games” commented Petr Konecny after the match.

France needed one and a half sets to finally find their best rhythm and dominate the scene in set 3 of the match with Greece. Earvin Ngapeth paced the home side with 19 points and the hosts can barely wait for the “big match” with Germany scheduled for Thursday at 7 pm. “The first match is always difficult. We initially had some problems in reception but we gradually fixed this and served well” said France mentor Philippe Blain.