Kumamoto, Japan, November 24, 2011 - Coming off back-to-back losses against the two top ranked teams (Brazil and Russia) in the 2011 FIVB Men’s World Cup, USA hoped to start the second round on the right foot with a relatively easier opponent in Egypt. 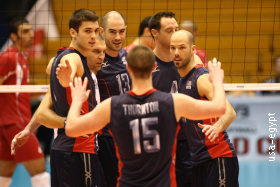 Leading the USA was Reid Priddy with 15 points. Clayton Stanley was the match’s most impressive player with 14 points, and four of those were aces. Out front leading all scorers was Egypt’s lethal lefty Ahmed Abdelhay with 21.

Stanley went into this match tied as the tournament’s top server so far, and it didn’t take him long to get his serve going against Egypt as two consecutive aces helped USA go up 6-2. The Egyptian star Abdelhay was fiery as always (with eight in the set), and four early spikes keeping his team within three. But with good blocking from Russell Holmes and more great serving from Brian Thornton and Evan Patak (each with an ace) pushed USA ahead 19-12. USA wasn’t as sharp as they could have been late, but three errors from Egypt led to USA set point and Priddy closed from there, 25-19.

In the second set, Stanley again had his serve going strong with an ace to help jump USA ahead 5-2. But more Abdelhay for Egypt and a Ahmed Afifi (Youssef) spike to the corner brought the underdogs back within two. A Matthew Anderson errant spike let Egypt even the score at 11-11. Bhe USA would jump back ahead with a Priddy smash putting them up 18-13, and with three down the stretch from Anderson and another USA ace from Holmes they would take the second 25-20.

The Egyptians looked determined early in a third set rally, marked by a great Wael Alaydy rundown to the sidelines, finished off by Abdalla Ahmed. Subsequently Mohammed Issa (Mostafa) actually put Egypt ahead 8-7 at the TTO on a serve that found the corner. The score was tied at 12-12 when the USA pulled off a string of four unanswered including Russell Holmes’ second ace and capped by a Priddy smash on the wing. The USA stayed in control until late when Mostafa put his second stuff of the match on Stanley out wide to close to 22-19. But it was too little too late as the USA took the set 25-20, and the match 3-0.