The third day of play delivered the first major surprise since the start of the FIVB Volleyball Men’s World Cup in Japan, as 2011 European silver medalists Italy scored their first win over triple world champions Brazil since 2003. 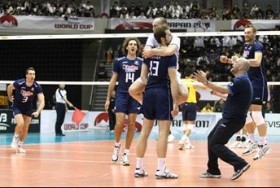 The Italian joy was overwhelming after the “Azzurri” scored their first win over Brazil in 8 years , FIVB

That was a classy Volleyball World Cup in Japan game that delighted a massive audience in Kagoshima and ended as Italy sealed it with an incredible score (22-20) at the tie-break.

Pre-tournament favorite Brazil took on the third-ranked Italian squad on day three of the FIVB Men’s World Cup hoping to remain undefeated after wins against Egypt and the USA.

However, the triple world champions would be their own worst enemy on this day with 22 service errors, allowing a 2-1 lead escape them as Italy came back to win a thriller 3:2 (25-16, 20-25, 18-25, 25-21, 22-20). Italy’s Michal Lasko produced a monster match notching 27 points with seven blocks. He was supported by the hard serving Ivan Zaytsev with 16 points including four aces.

For Brazil, Sidnei dos Santos Jr (aka Sidão) paced his side with 17 points with Leandro Vissotto Neves and the captain Gilberto Godoy Filho (Giba) following with 16 and 14 points, respectively. Italy coach Mauro Berruto commented after the game:

“Playing Brazil is always a fantastic thing. The level of the match was high and we both showed wonderful Volleyball on court. For us this is a great day, because the last time we beat them was in 2003. We were waiting for a long time for this. We will enjoy the moment, but the road is still long. We have an important two points here, and I hope maybe we’re breaking through a wall we had when playing the best team in the world. We have to stay focused on our ultimate goal, which is the ticket to London”.

Croatia and the Netherlands to play classy...

INTERVIEW: Maja Ognjenovic for WoV – “The...