PGE Skra BELCHATOW qualified as the top team in Pool B and in the semis coming up on Thursday PGE Skra will play Sada Cruzeiro while the second semi will be a derby starring TRENTINO Diatec and Zenit KAZAN. In the women’s competition, Fenerbahce SK ISTANBUL and Rabita BAKU will cross their way in the semis while Sollys/Nestlé OSASCO will play Lancheras in the second. 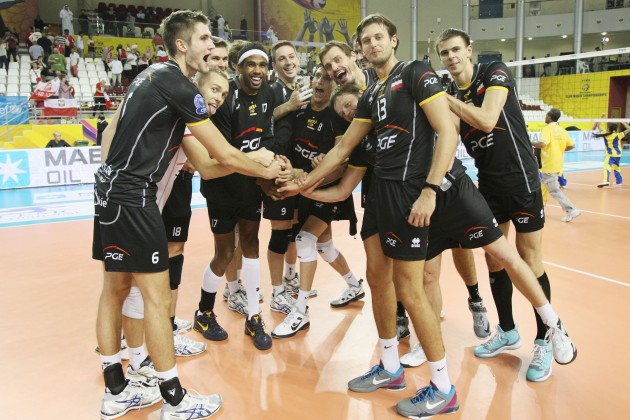 In today’s match with the hosts of Al Arabi, Aleksandar Atanasijevic was the top scorer of PGE Skra with 19 points followed by Mariusz Wlazly with 14, including three blocks. Michal Winiarski and Daniel Plinski added 11 and 10 respectively with the former finishing with a match-high four blocks. Christian Pampel led the defeated forces with 17 tallies while Ahmed Al Bakhet and Mohamed Ibrahim added 11 and 10 respectively. PGE Skra out-blocked Al Arabi 13-3 while the home team was slightly better in the aces category 7-5.

Zenit KAZAN of Russia secured one of the two semifinal spots of Pool B in the Men’s FIVB Club World Championship by demolishing Zamalek of Egypt in straight sets (25-13, 25-19, and 25-14) at the Aspire Zone Hall of Doha on Wednesday. The winning side held huge margins in the categories of blocks (12-2) and aces (8-2). They made 14 errors to 21 by the losers and every player in the roster saw action in the match. Evgeny Sivozhelez and Matthew Anderson each collected three blocks and two aces with 10 and 9 points respectively for Zenit KAZAN while Maxim Mikhaylov contributed 10 points with one block and two service winners. Reda Haikal and Mohamed Badawy each finished with 9 points for Zamalek.

Vladislav Babichev, player of Zenit KAZAN, said after the match: “We are happy for this win which qualifies us to the semi-finals. We were expecting a tough match but we won quite easily. We will be focused on the semi-final match tomorrow”.

Head coach Vladimir Alekno: “I am fully satisfied with the outcome of the match and the way my players played the game. The Egyptian team did not show their best Volleyball. We came here with the ambition to win the title but we are aware of the fact that from now on we will be facing very strong teams, playing world-class Volleyball”.

In the women’s competition Fenerbahce SK ISTANBUL subdued Kenya Prisons in straight sets (25-14, 25-17, and 25-11) to finish first in Pool B with a 2-0 win-loss record and play Rabita BAKU of Azerbaijan in the semis. Fenerbahce received the benefit of 29 points from the opponents’ errors while making only 10 for the entire match. The winners held a 7-4 advantage in blocks and 5-2 in aces. Seda Tokatlioglu led the Turkish club with 13 points, including five blocks, followed by Mari Steinbrecher who notched 12 with three aces. Paula Pequeno charted eight.

Seda Tokatlioglu, captain of Fenerbahce, said: “We are happy to have won today by 3 sets to 0 against a team that played a good match. Our mind was already in the important semi-final we will play tomorrow against Rabita. We know it will be a very tough game, but we will do our best to win and continue our way towards winning the title again”.

Kamil Soz, coach of Fenerbahce: “We are very happy with this 3-0 win and congratulate the Kenyans for the good match they played against us. We will now concentrate on the match with Rabita tomorrow. We know that they are a strong team with many foreign professional players in their ranks, but we came here with the intention to win the title again and will work hard to achieve that objective”.

TOP 10 female scorers in Europe for...