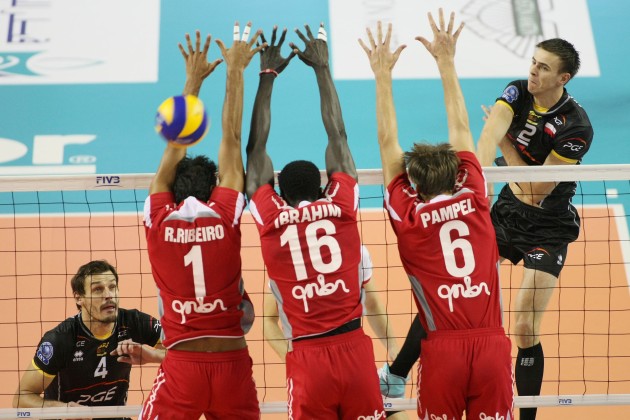 Aleksandar Atanasijevic was the top scorer of PGE Skra Belchatow with 19 points followed by Mariusz Wlazly with 14, including three blocks. Michal Winiarski and Daniel Plinski added 11 and 10 respectively with the former finishing with a match-high four blocks.

Daniel Plinski and Karol Klos led PGE Skra Belchatow to an 8-6 lead over Al Arabi.  The Polish club led 16-13 at the second TTO. Pampel and Ribeiro Renan led a comeback from the local side to close within two points at 18-16. Then Wlazly and Atanasijevic took care for the PGE Skra side that claimed the set 25-17.

Atanasijevic started the second set with a cannon-shot followed by an ace from Klos. Ribeiro scored two in a row to narrow the distance to 5-4 and Plinski’s attack was wide for a 5-5 tie. Klos led a PGE reaction with his block and they led 8-6. The strong serves of the Polish club led to a compact blocking and a 16-13 advantage at the second TTO. Atanasijevic continued to hammer the opposition with his terrific kills and PGE Skra took the set by a comfortable 25-17 margin.

By winning the first two sets, PGE Skra secured a semifinal spot and that seemed to factor in their intensity during the third set. Pampel and Al Bakhet led Al Arabi to 8-5 and 16-10 advantages. Then it was the combination of Pampel’s serves with the attack from Ibrahim that gave the home side the third set. Ibrahim blocked Atanasijevic to close the action at 25-16.

Consecutive blocks by Plinski and Wlazly sent PGE Skra to a 5-1 lead. Wlazly served an ace and Plinski smashed his spike down the middle for an 8-3 advantage. A series of attacking errors from PGE allow Al Arabi to come back within two points at 13-11. A couple of big spikes by Winiarski lead to a 16-13 advantage. Plinski provides extra comfort at 19-15 followed by a powerful spike of Atanasijevic off the block. Plinski then scores via a block for 21-15. The set finished 25-17.

POL M: Resovia extended with the most...