Hypo Tirol wrestled the Slovenian vice-champion Calcit Kamnik 3:2 In an other hit-match ACH Volley stood up to Aich/Dob after 115 minutes 3:1 . Read the latest news from volleyball world on worldofvolley.com. 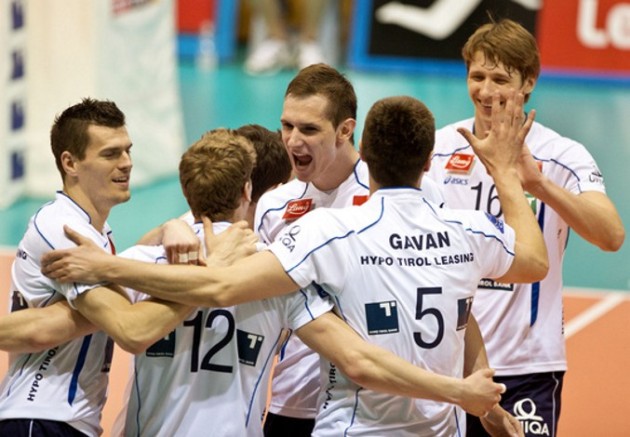 Arriving on matchday the Tiroleans had to bear the short-term drop-out of blocker Davor Cebron, who got a back injury on warm-up. After trailing 1:2 the Tiroleans fought back. The attacks of Jimenez, Berger & Co got more efficiency, Gavan and Frances did a well blocking while sweeper Fred Laure demonstrated a keen defense performance. Besides setter Tamas Kaszap boosted his side out-variability. So Hypo Tirol forced the fifth set, which was won 15:7. The first away win in 2012/13.

Head Coach Stefan Chrtiansky: “It was the expected tight match. Finally our well-played attacks and blocks in the fourth and fifth set tipped the scales. In this case I’m very comfortable with the result. It’s not easy to win here.“