Slovakia and Spain meet once again for final match in Poprad 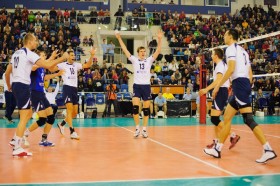 The semifinal of team Slovakia with Turkey turned into a real drama: the hosts set the pace in the opening set (13:11, 20:15) displaying good combinations in attack to clip it with the score of 25-22. Good play contributed by opposite Emre Batur and setter Arslan Eksi got Turkey back on track in set 2 (10:6); Slovakia drew level at 10 but some blocks paved the way for the guests that wrapped it up at 25-23. Turkey easily controlled the game in the third set with Slovakia struggling to find its own rhythm (25-17) thereby shocking the many spectators in attendance in Poprad. However, the home guys did not surrender: they went up 11:3 in set 4 and stormed back with a comfortable 25-17. As teams changed sides in the tie-break, Slovakia was up 8:6, to say the final word at 15-12 after Turkey attempted a comeback.

“The reaction of my players after a poor third set was great” says local head coach Stefan Chrtiansky. “We changed our rotation and it helped. I want to thank my players because they did not give up and we are happy to play the final” he adds.

“I am really disappointed because we dissipated a 2:1 lead and could not finish the match. I wish good luck to Slovakia for the final; as far as our team is concerned, we can already start preparing our next season” states Veljko Basic, the mentor of Turkey.

Spain beat Estonia in another close semifinal, where the guys from Tallinn started well to claim the first set. Spain got back on track and dominated the scene in set 2 (25-18) setting the pace also in the next section of the game, moving up 14:11 before Estonia fought back to level at 14 all. Spain stayed tuned and a block on Oliver Venno sealed the final 25-22. Estonia went up 8:6 by the first mandatory stop of set 4 but Spain turned the score around (14:11); Estonia missed on a set ball before Spain closed it out with the score of 27-25.

“We knew that it was going to be a difficult match, because Estonia is strong in block and attack and we have to serve well to control their strengths. I think we played technically and tactically a good match. The final match with Slovakia is important for us to qualify for the next round in Sofia and also for our young players to get valuable experience. Of course I am checking the results of the FIVB World Cup and I know we may advance to the next stage even if we finish second, but we want to win, fighting for every point” singles out Spain head coach Fernando Munoz.

Estonia coach Avo Keel was not happy with the performance of the referees: “Many decisions of the linesmen were reversed by the first referee and it is very sad that the outcome of the match was influenced that much by one guy”

Brazil rides its bench to beat China, but lose a point in the process 3:2