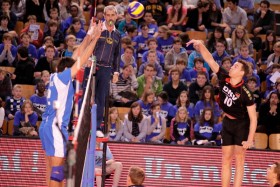 Germany qualified on Friday for the semifinals of the Olympic pre-qualification tournament in Tourcoing after edging Greece 3:1

After losing the opening set, Germany got back full control of the game to qualify for the semis as second ranked team from Pool A. With two defeats in as many matches Greece is sent back home and has no longer any chance to fulfill the dream to compete at the 2012 Olympics in London.

“After making some changes we played good in the second set” says Germany assistant coach Ralph Bergmann. “We have qualified for the semis but it is still a long way to the Olympics. I think we may have a chance to qualify next year as we organize an intercontinental round in Berlin. However, if we can make it also to the Continental qualifier in Sofia, it is just fine. Anyway, if we do not win this tournament, this won’t be such a disappointment as for other teams competing here”.

The Czech Republic came out on top of a game with Belgium where the score stayed extremely close in all sets before the guys around giant Jan Stokr celebrated the happy end with a clear 25-18 in set 4.

“Tomorrow we play Germany and of course we want to reach the final” states Czech head coach Jan Svoboda. “The road to the Olympics is long and for the moment we just want to stay focused on our next game” he adds. Belgium captain Franck Depestele comments: “We had our chances to win this game and the semifinal with France will be tough for both sides. If we play our own game, we can beat them and make it to the final”.

Slovakia and Spain meet once again for final match in Poprad