Buenos Aires, Argentina, January 21, 2012 - That the Argentine Boys' Youth Team is improving and growing can be seen on each match played by the young team. 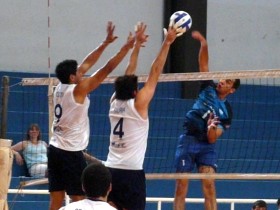 The best scorer of the night was Rodrigo Ocampo with 16 points while on the other side of the net, Cristian Assaf scored 12.

With Lucas Barreda, one of the changes in the light blue – white jersey team, the host team started a very good match on the first two sets fought and with equal score several times.

Paul Alegret became stronger on the second set and Obras got the lead 21-23 to close the set and get a 0-2 advantage.

On the third set, Obras blocking as its main weapon finished the match with an important victory for the visiting team.

Italy: Back with a point