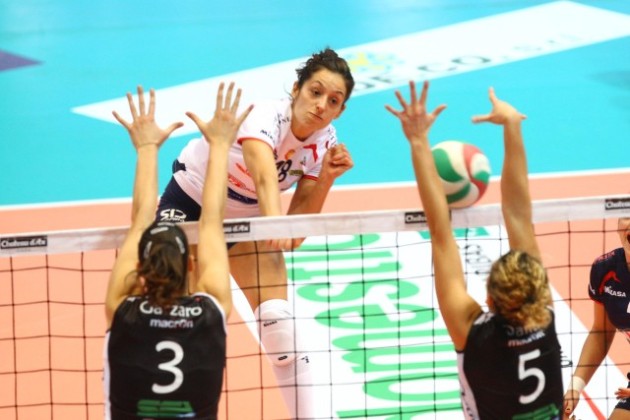 Though born in Santa Fe, Argentina, Brussa has spent her entire career in Italy where she moved in 2003. She did play for Italian top teams such as Scavolini PESARO, Rebecchi Nordmeccanica PIACENZA and LiuJo Volley MODENA, and last season she was a member of Idea Volley 2002 Bolonia.

She has got some valuable experience from the European Cups and will add some great value to Tauron MKS DABROWA GORNICZA that is set to compete in the CEV Volleyball Champions League for the second consecutive season.

Brussa joins a series of foreign players contracted for the 2013/2014 season such as US American Rachael Adams, Croatia’s Marina Katic and Brazil’s 2008 Olympic champion Welissa Gonzaga. The club is still looking for a second setter.

Brussa will replace Joanna Kaczor who has left the club to play next year for Impel WROCLAW and is the second opposite in the group next to Katarzyna Zaroslinska.

“Brussa, who stands at 188 cm, is a very talented Italian player with Argentinean roots. In Italy she has won the national league as well as national cup not to forget the CEV Cup. She is going to be a good replacement for Joanna Kaczor and her experience in the European Cups will be very useful for our next campaign in the CEV Volleyball Champions League” says Tauron MKS press officer Michal Swarlik.

PANAC W: Canada moves to quarterfinals of Pan Am Cup

POL W: Without surprises in quarterfinals