The second weekend of the 2013 World League action saw Brazil take its first two wins against current title holder, Poland. Gustavo Endres, a former player on the Brazil national team provided his views on where he thinks his country will be going in this year’s edition of the World League. 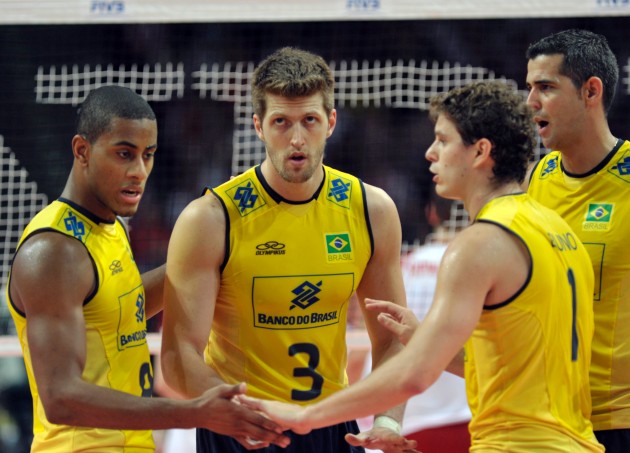 “It was a pleasure to watch the Brazilian team perform this past weekend and to see them take victory in both their matches against Poland. Although the volleyball action was intense Brazil managed to end Poland’s seven-match World League winning streak and after seeing the team in action, I think we are on track to win the World League title this year.“

“The Brazil team is stronger than ever under Bruno Rezende’s leadership, and with Lucão at his best and Vissotto’s experience in Russia we have a good chance of making this happen. And with Eder, finally getting his big chance to show everyone what he can do as well as the young and dynamic Lucarelli and Isac on the team, we have nothing to worry about.“

“Looking further ahead, I believe that Poland and Brazil are the two teams to look out for in the new Olympic cycle. Both sides are strong although they couldn’t be any more different in how they are set up.“

“Brazil is creating a new generation of players, and we now have a team comprising more experienced players like Dante and Murilo (who is not playing with the national team this year because he is recovering from a shoulder surgery) and young players like Lucarelli and Isac who have just arrived. This mix has helped to create a well balanced team. Poland on the other hand has kept the same base of players over the past few years with Kurek standing out as a key player.“

“Nevertheless with this year’s World League format, which has seen an expansion in the number of participating teams, there is now an opportunity for new teams to participate and who knows, even arrive at the finals. The level of competition is rising, which only helps to improve our sport and this is a very good thing.“

“We all know that to win, we need to play together as team. Volleyball is a group sport and every one depends on the other to do his best. This weekend’s volleyball action has shown that if a player stands out, he is not doing it alone – not in this sport.”

Gustavo Endres retired from the Brazilian national team squad after the 2008 Olympic Games in Beijing. He had an illustrious career with the national team, which included six World League titles (2001, 2003, 2004, 2005, 2006, 2007), two World Cup gold medals (2003, 2007), two World Championship titles (2002 and 2006) and one Olympic gold medal (2004). He also won two gold medals at the Pan American Games in 2007 and 2011 and the FIVB World Grand Champions Cup title in 2005. Until 2008, he played as middle-blocker/hitter for the Italian club Sisley Treviso, winning the 2005–06 CEV Champions League. He was also awarded “Best Blocker” and “Best Server” that year. Since then he has played for various Italian and Brazilian clubs and recently announced that he will continue playing with Brazilian club CANOAS for this year.

BRA M: Get ready for the breaking...

BRA W: After arrhythmia, Vere back in...