Before their match against Estonia, Argentina was sure to finish second in Pool B of the FIVB Volleyball Men's U21 World Championship in Ankara. However, they approached the game with a fair-play attitude and did not allow the European team to win so desired two sets to make it to the Round of 16. 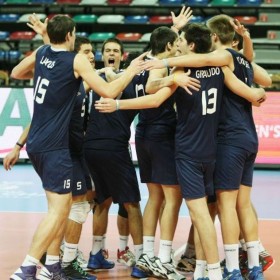 So, Mexico took advantage of Argentina’s 3-1 (25-19, 22-25, 25-17, 25-22) victory to keep their fourth position in the final ranking. On Wednesday, the South American side will face China, while Mexico will have a tough job against hosts Turkey.

Argentina played well in the first set to take charge on the court. They took advantage of Estonia’s unforced errors to win it by 25-19.

Facing the dilemma “now or never”, the European team stepped up their performance in the second set to open up a wide gap in the score. The South Americans fought back to tie at 22-22, but the following three rallies went Estonia’s way for the final 25-22.

Argentina had no intention of stepping back and after 25-17 in set No. 3 and took the lead again.

The two teams engaged in a crucial battle in the fourth set. Fabian Muraco’s boys controlled the scoreboard, but the team led by Urmas Tali had no choice, but to fight to the last breath. The Estonians managed to follow their opponents closely behind in the score, but could not pull it all the way through to win another set. After 25-22, Argentina could celebrate the victory, while sad Estonians has to start packing for their flight to Izmir.

Pablo Kukartsev topped the scorers’ chart of the match with 23 points for Argentina. Renee Teppan was Estonia’s most prolific player with 14.

See the WoV Community profiles of Junior national teams of Argentina and Estonia.

ITA W: Mencarelli – “Playing in F6 will be crucial to history of this Italian team”

ARG: Mini Volleyball Festival for all in...