ITA W: Mencarelli – “Playing in F6 will be crucial to history of this Italian team”

The debut in the World Grand Prix Final Six for the Italian coach Marco Mencarelli is approaching on Wednesday, August 28 with the hosts in Japan. 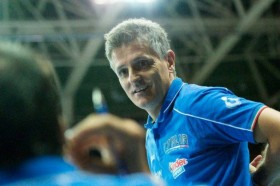 Two more days of intensity for the Italian national team, who will play in the presence of some of the strongest teams in the world: Brazil, United States and Japan, in fact, three teams which have occupied the first three places in the London Olympics.

Italy comes to F6 pushed by the beautiful path achieved in the preliminary stage where they collected seven wins against only two losses.

Step by step, despite their young age, the Mencarelli’s team has made progress, earning Final tournament after missing it last year.

“It is something that we have earned on the field and I am convinced that the whole team has strongly desired it. I believe that playing in the Final Six will be a source of our playing experience crucial to the history of this team,” said Mencarelli.

Italy will challenge Japan, China, Brazil, the United States and Serbia in Final Six, all teams that are part of the world elite.

“It’s a beautiful thing,” says the head coach, ”An important test that will allow us to see where we are, what’s missing and what are the aspects that work best. I’ve always been a believer that the high level of competition is to exalt the strengths and perhaps masking weak points”.

“Before the match against Japan,” said Mencarelli, “I’ll organize a meeting with the girls to sum up of what has been done, what has been built and to determine approach from the very beginning”.

In view of the meeting on Wednesday, Guiggi’s companions today trained in the gym and then they done a session in the weight room. Meanwhile, the recovery of libero Monica De Gennaro is continued. She is back from injury in her left calf gained in the preliminary stage in Taiwan.

See the WoV Community profile of Mencarelli and Italy.