The organizers of the upcoming CEV VELUX Volleyball European Championship – Men have recently worked on a Facebook application whereby all volleyball fans can help to make the ultimate playlist for the competition. 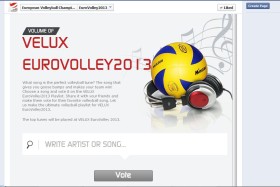 The right sound is essential in creating a good ambiance for any volleyball match and it is also going to be the case at the upcoming EuroVolley 2013.

The local organizers have decided that you will be the ones to decide which music will be played in the venues that are set to host matches!

“Everyone has got a favorite tune that makes them feel good and that can be used as a kind of soundtrack for a volleyball match” says Mads Bang Aaen, the Managing Director of the Danish Organizing Committee.

“We want our fans to cast their votes to determine the playlist that will be used for the EuroVolley 2013. Just imagine how would you feel if you hear one of your favorite songs during a time-out of the final weekend at “Parken stadium” in Copenhagen,” he emphasizes and calls fans to visit EuroVolley 2013 Facebook page to vote for your favourite song.

To read more similar news, click on Did You Know?

Belgian Red Dragons – Volleyball around the...