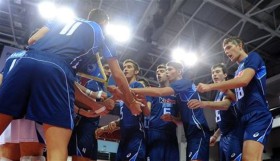 Although Russia suffered their first defeat, they kept their leadership of the pool with 3-1 win loss ratio, gaining 9 point (1 point ahead of France). Italy improved to 2-2, but stayed in the fourth position.

Needing at least two sets to secure the top of the pool ahead of France, the Russian team played in their rhythm in the first set to win hardly 25-23 after they showed well known blocking activity beside using their point machine Victor Poletaev to hammer a lot of spikes.

Italy‘s engine Luigi Randazzo worked very hard to give his team the upper hand for two sets where they advanced 2-1 after 27-25 and 30-28 set wins.

Russia came back to save their situation and gained the fourth set widely 25-11, before Italy played their best to win the tiebreak in style 15-12.

Luigi Randazzo with amazing 33 points topped the match scorers and had the best scoring performance in the tournament so far, including 4 aces and 1 block. Luca Borgogno followed him with 15 points.

See the Wov Community profiles of Italy and Russia.