Argentina beat Australia in straight sets (25-21, 25-22, 25-20) in their opening men's volleyball preliminary round Pool A match at Earls Court on Sunday. 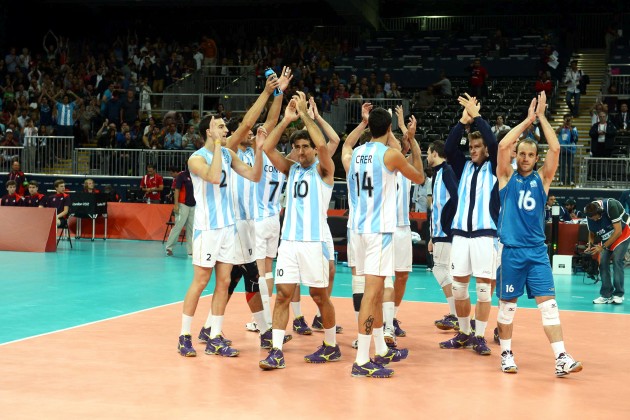 Sebastian Sole, Facundo Conte and Pablo Crer finished with 13, 12 and 11 points to spearhead the winning offense while Australia’s Thomas Edgar had a match-high 16 points and Igor Yudin added 13.

Sole was effective in 9 of 11 killing attempts while Crer was even better going 8-for-9 in his attacks.

The first started tightly, with Crer and Edgar landing impressive spikes, and both sides also blocking very effectively. Argentina edged ahead to 14-10 with Sole, Conte and Crer spiking well, and stayed in front thanks to solid defensive play. Yudin and White scored for the Volleyroos as they fought hard, but Argentina‘s intelligent play saw them through to a 25-21 set win.

The teams traded points evenly throughout the second set, with Edgar, White and Yudin being important for Australia, while Argentina’s clever setter Luciano De Cecco fed Conte , Crer and Federico Pereyra. But after drawing level at 18-18, the South American side made fewer mistakes than an Australia side mainly reliant on power, and pulled ahead to win the set 25-22.

The third set followed the same pattern with Yudin and Edgar blocking and spiking well for Australia, while De Cecco controlled Argentina’s intelligent use of the ball. But Conte and Sole were the stand out players on the day and their team moved ahead. Ultimately a very young Australia side made a few too many mistakes to compete. Argentina took the set 25-20.

Argentina play Italy in their second preliminary round match on Tuesday, while Australia will take on Great Britain.