ARG: Argentina and Italy, a history of working together

The friendly tour between the Youth's Boys National teams of Argentina and Italy in Buenos Aires province was also a great preparation for both teams and shows that to work together for both Federations in an outstanding relationship brings positive results for all involved volleyball people, staff, players, federations, etc. 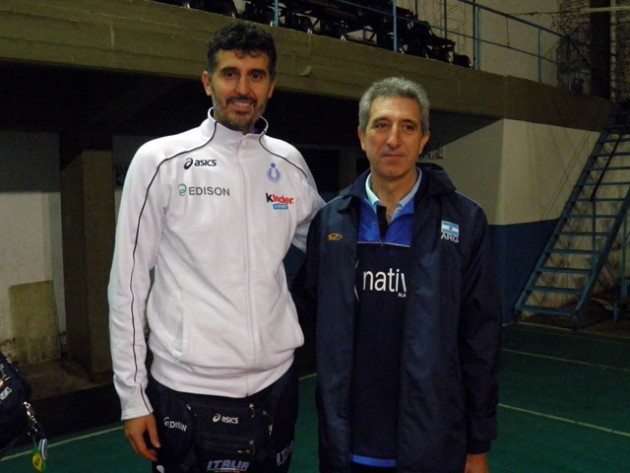 Since the Argentine Volleyball Federation was created and from the year 2008 onward several Argentine grass-root categories teams work together with Italian teams. This year the Argentine team with Junior players like Nicolás Uriarte, Cristian Poglajen, Nicolás Bruno, Pablo Crer and Sebastián Solé, participated for the first time in a competition organized by the European Team prior to the London Olympic Games 2012.

The manager of the light blue – white grass-root teams, Osvaldo Celia, told how everything started last 2008: “When we were programing the activities of the World Championships, and due to our good results, Italy opened a window mentioning that they would welcome us if we had the chance to travel to Europe. Through out Livenco Conti, their General Manager for all teams, a contact was done with Marco Carpaneto, at that time Manager of the Youth’s and Juniors’ Teams“. Argentina at that time made a friendly tour through out Italy and even won the Championship “Six Countries” with these named talended players.

On the following year, the exchange became more important prior the 2009 Youth’s World Championship held in Italy in Jesolo and Bassano del Grappa. “Thereafter we started to have a continuously relationship and mutual respect on both coaching teams. To talk about Italian volleyball is to talk about the best and strongest volleyball teams of the world and that they give value to our grass-root teams is very important” kept saying Celia.

Time went on and Italy became a “compulsory” stop for the Argentine men and boys teams. The tournament Pino Smargiassi, with Argentine presence in the year 2009, repeated the experience in the 2010 calendar on their way to the Youth’s Olympic Games in Singapore and then in 2011, with the Youth’s participating in Argentina of the FIVB World Championship the European team came to Argentina. This year, it was time to go to Italy and as “we are inviting their team during the last two year but as they had not yet qualified for the 2011 World Championship. Now, combining work with Brazil we proposed to work with both countries so that their expense would be more justified and the tour took place” added the Argentine manager.

In charge of the Italian delegation touring Tapalqué, Azul and Bolívar was Giacomo Giretto, former national Italian player that had been at the Juniors’ World Championship in Rosario, 1993. “I remember how nice its people were and their excitement” started saying the Italian former player to add with reference to this year’s friendly series: “It has been a very interesting tour with great results. First the sport results but also learning to know the culture of the people that live here. We enjoyed it a lot. Argentina is a beautiful country ad we played very high level matches“.

Giretto also praised the development of Volleyball in Argentina at grass-root categories “They work very good. The National Argentine teams are very good ones with great output and very talented players to build an athlete. Even though they are not tall, it is a very strong team and the height does not influence their performance” he added.

From Argentina there are already plans for friendly tours during the year 2013 as a result to this tour success, leaving open the exchange between both countries. “This is also the result that Argentina grass-root teams have a name in the world” finished saying Celia.

NORCECA W: High expectations for the NORCECA Women’s U20