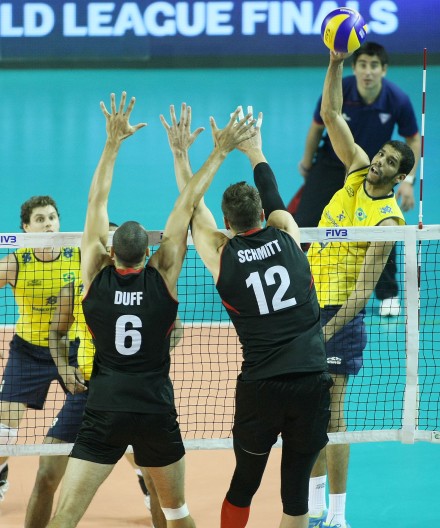 Having lost to Russia in five sets on Wednesday, Brazil needed to win the game and that they did, maintaining their impressive record against Canada which includes 17 wins from 21 matches, including 13 out of 16 in the World League and four on the bounce.

Five points on the trot gave Brazil a 15-11 and 19-14 lead. It only got worst for Canada as Adam Simac rolled his foot before Brazil had set point at 24-18. They only needed one after Fred Winters spiked wide.

With Schmitt on the bench, Canada’s stars in the win against Russia didn’t seem as influential. In second set, Winters pulled off a superb solo block on Lucarelli to give Canada the lead at 21-20. Wallace spiked, Lucas blocked Schmitt to tie at 23-23 before Lucas and Wallace blocked Winters to give Brazil set point. Canada had their own set point at 27-26 after a bullet serve from Joshua Howatson but successive held-ball calls gave Brazil set point again at 29-28 before Winters spiked into the net.

The close second set defeat seemed to take the wind out of the sails of the Canadians as Brazil opened an 8-4 lead in the third. Although Canada fought back to 19-18, it just spurred Brazil back into action. Canadain skipper Winters tried to rally the troops but a spike out at 23-19 gave Brazil match point before Wallace sealed it with his 18th point and Brazil’s 999th set won in the World League. (Italy is the next best with 894).

To read more news from this competition click World League 2013.

WL: Italy through to semifinals with Argentina victory (PHOTO)