WL: Italy through to semifinals with Argentina victory (PHOTO) 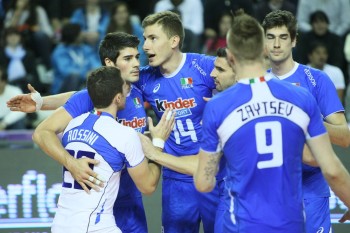 Italy were hot favourites going into the game having won nine of the previous 14 World League matches against Argentina although Argentina did have history, having won the last World League encounter at the 2011 Finals.

Great float serving from Emanuele Birarelli really put Argentina under pressure. It was enough for Argentina’s star setter and captain Luciano De Cecco who was subbed out, for what looked like a shoulder injury. Argentina pulled back to 18-14 after Zaytsev served long but the 24-year-old finished off the set with a customary spike, his sixth of the first set, 25th of the Finals and 240th in this year’s World League.

Argentina led for the first time in the match when Rodrigo Quiroga blocked Thomas Beretta at 2-1 in the second set and thanks to an Ivan Castellani spike opened that lead to 3-1. A superb Quiroga receive and spike in the same play gave Argentina the lead at 21-20 before Quiroga stepped up to the service line. His floaters caused Italy all kinds of trouble. Argentina tied, 1:1.

Italy had the better of the start of the third set with that man Birarelli at the service line again but it wasn’t as profitable as the first set. Cristian Savani served his second ace before Pablo Crer spiked out to give Italy the set 25-17 and confirm their spot in the semifinals.

The atmosphere had, not surprisingly, dropped somewhat with the crowd knowing that their beloved Argentina had no chance to advance in the World League Finals but this didn’t stop the home side starting the fourth set well at 4-1. Argentina had a brief fightback thanks to Crer blocking so well at 22-21 but skipper Savani rallied his troops before Piano had the last word with his fifth point of the match.

The best scorers were Ivan Zaytsev with 16 and Cristian Savani with 12 in Italy, while in Argentina the most efficient were Ivan Castellani and Rodrigo Quiroga with 13 points.

To read more information from this competition click on World League 2013.

See the photo gallery from this match below.

WL: There are no easy teams in WL – Wallace