In the other match of the round RJX (RJ) will seek rehabilitation in the competition against BMG / São Bernardo (SP), on Friday, at 19.30h in the hall Maracanazinho in Rio de Janeiro (RJ). The match will be broadcast live on Esporte Interativo. In the last round, the hosts were defeated by Vivo / Minas with 3:0. 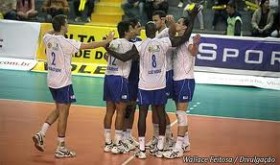 Both teams have similar campaigns in the tournament and fight for playoff in the top eight. RJX is in on 6. place with 27 points (9 positive and 8 negative), while BMG / São Bernardo is on 7. with 26 points. RJX is ahead by having a larger number of victories with 3:0 and 3:1.
The spiker  Dante, RJX, commented on the importance of the clash for both teams.
“We have one goal, which is the place for the playoffs, for that we need to win.

Let’s play at home, where some games are unbeaten, the team has improved in the league and we have the support of our fans. BMG / São Bernardo is a good team, which is in a situation similar to ours, and the worth of victory is doubled. We have a few games towards the end of the qualifying, but we need to start, put aside victories, always think about a game at a time.“

The setter of BMG / São Bernardo, Paul Renan, sees the match against RJX as a decision.
“As in the first round is a direct fight for sixth place, so we know they will come with full force, not to mention that they are in another time in the competition. We must remember that we were able to beat them at home because we played well. It will be a very difficult game, but we know we can surprise again.”