BRA M: Leal confirmed – “I might play for Brazil”

Yoandry Leal in jersey of Brazil? It is possible! 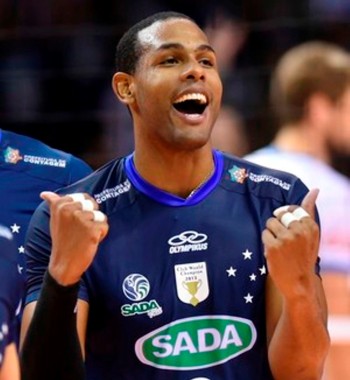 Approximately a year ago, there came up a rumor that Yoandry Leal could play for Brazil on the Olympic Games in Rio 2016. The player got suspended from the Cuban Volleyball Federation, as well as many of his compatriots, because he chose to play volleyball abroad despite it meant that he could not play for the national team anymore. However his suspension expired and he is available to play for any other country…. Brazil for example!

Leal has finished his third season in Sada Cruzeiro, and, after winning the title and the MVP award, Brazilian journalists asked him a direct question – is it possible that Yoandry Leal accept to play for Brazil in future?

“Actually I do not know. I do not have much information, but if I get the Brazilian citizenship then I would love to play for the national team. I am here, I have one more year of contract with Sada Cruzeiro” stated Leal, and then added: “I am Cuban, and I really wanted to play for my country. But, I also want to play on the Olympic Games before I retire.”

TUR W: This is how Kim brought Cup to Fenerbahce (VIDEO)