WL: Brazil wins tiebreaker vs. Serbia in clash of titans 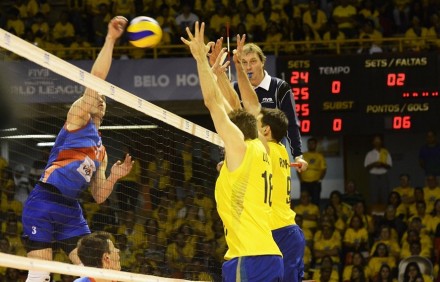 Although the home team started the match in a better mood (6-4), Serbian players didn’t take much to wake up. They leveled at 6-6. Brazil took the initiative, but was never more than one point ahead. Serbia had a solid advantage at the second techical time-out (14-16). Probably the crucial moment in the first set was Brazil’s confusion on the serve at 23-22. Serbia sealed the first set ball (24-26).

The fans in Belo Horizonte wanted the win so Brazilians had to play harder. It was mostly visible on their serves. Soon, home team gained an unreachable lead (11-8). After it won 4 points in a row, Brazil had 15-9. Serbians made too many errors on the attack (21-15) and Brazilians were on fire – 25-17 and 1-1 in sets.

When the home team gained a 5-2 lead at the start of the forth set, the fans in Belo Horizonte probably thought it was all over. Serbian head coach Nikola Grbić, who had his official debut on the bench of that national team, was forced to make some changes and it paid off. Serbia made a turnearound (14-16). The guests were on the run (20-16). Brazilians “melted” the opponents’ advantage and equalized at 23-23. Still, Serbians converted the fourth set ball (26-28).

Both teams were nervous in the tie-break, but Serbians much more. Although the Brazilian players made several service errors, it was tied (4-4). Brazil created the gap after Lipe’s block on Atanasijević (6-4). Poor setting by Serbian Brdjović gave Brazilian a 7-4 lead. After another mistake from his setter, Grbić had to substitute him (8-5). Atanasijević’s spike went wide (9-5). Serbia returned in the game after Stanković’s ace and Vissotto’s and Lucarelli’s errors in the attack (10-9).Stanković’s serve went wide while on the other side, Lipe’s didn’t – it was an ace (12-9). Two service errors on both sides and Kovačević’s mistake during spike gave Brazil a 14-10 lead. Lucarelli ended the match by converting the second match ball (15-11).

FIVB Intercontinental Round / Pool A /

ECHQ W: Slovenia at European Championship for the first time