Brazil resisted a strong challenge to overpower Turkey 3-1 in a pulsating women's volleyball World Grand Prix finals match on Sunday, the last day of the tournament. 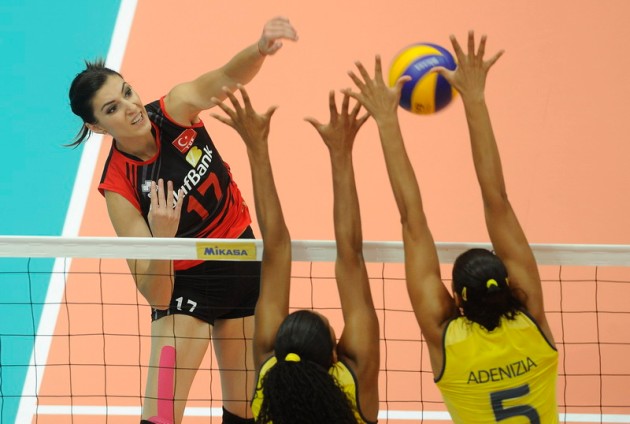 Turkey, who have already ensured a medal of the Finals by beating China on Saturday night, struggled to find their form as Brazail jumped to an 8-2 lead and improved to 18-11 to force the headcoach of Turkey Marco Aurelio Motta call a timeout.

Turkey then managed to cut it to 19-15 with a 5-0 run led by some fatal kills from Neslihan Darnel, only to see Brazil pull away again with a 3-0 burst.

Trailing at 18-24, Turkey tried to save three set points but gave up in the fourth as Thaisa Menezes jumped high to smash the ball home at the middle of the net.

In the second set, Turkey fought back their trademark offense as Darnel and Dundar Eda Erdem proved some good kills to lead into the first TTO 8-7 and enlarged the gap to 13-10.

Jumping to a 19-12 lead thanks to a series of mistakes from Brazil, the Turkey woman cruised to claw one set back at 25-23.

Despite losing the second set, but the Brazilians launched an amazing 7-0 run to cut the deficit to only one points in the final stage of the set.

Two sides traded runs in the third set to tie it at 12-12 before Brazil went ahead at 19-14 with a 7-2 run led by Fabiana Claudino. The captain then moved Brazil up to the set point with a smart kill. Neriman Ozsoy spiked the ball out of the court to allow Brazil make it 2-1 with a scoreboard of 25-20.

The fourth set was much easier for the Brazilians. They jumped to an early 5-1 lead and extended it to 13-7. Turkey fought hard back to narrow the gap to two points, only to see Brazil booked their match points at 24-12 with their solid defense. Their blocking proved too much for Turkey as they scored four points in a row with successful blocks teamed up by two or three players.