Camponesa/Minas achieved another major victory in Superliga. With consistent performance, they defeated vice champions Vôlei Nestlé (Osasco) 3-1 (25-20, 25-22, 21-25, 25-16) in away match of eighth round. 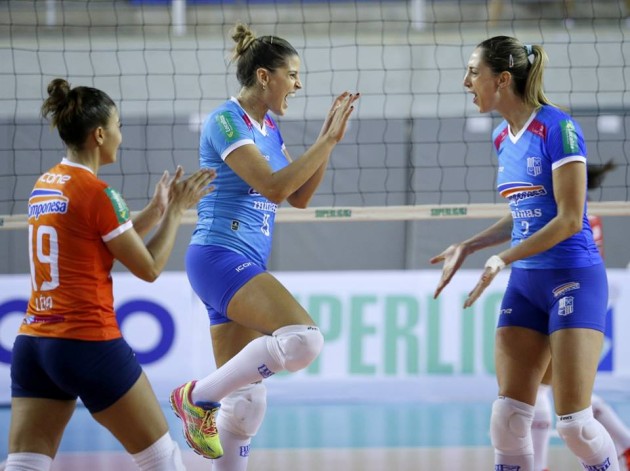 This was the third victory in a row for Minas and their next challenge will be at home court against title holders, Rexona-Ades.

Minas’ captain Caroline ‘Carol’ Gattaz was voted the best player on the court, but her teammate Rosamaria Montibeller was the best scorer of the game with 19 points. Thaísa Menezes topped Osasco’s scorers with 15.

The newest positive result put Minas in third place in the standings of Brazilian top division with 17 points, while their opponents dropped to fourth, after second consecutive loss, with 16.

Thus, Rexona are secluded leaders of Superliga with 21 points (seven wins and one defeat). Praia are second with 18 points (6-2).

Fabiana Oliveria ‘Fabí’, the libero of Rexona, showed outstanding performance and took the trophy for the best player of the match with 42% of positive reception. About the best scorers: Natália Pereira and Monique Pavão had 12 each in winning team, while Oliveira Walewska and Cuban Daymí Ramírez both collected 10 in Praia.

ITA M: Latina and Piacenza with defensive rally of the season! (VIDEO)