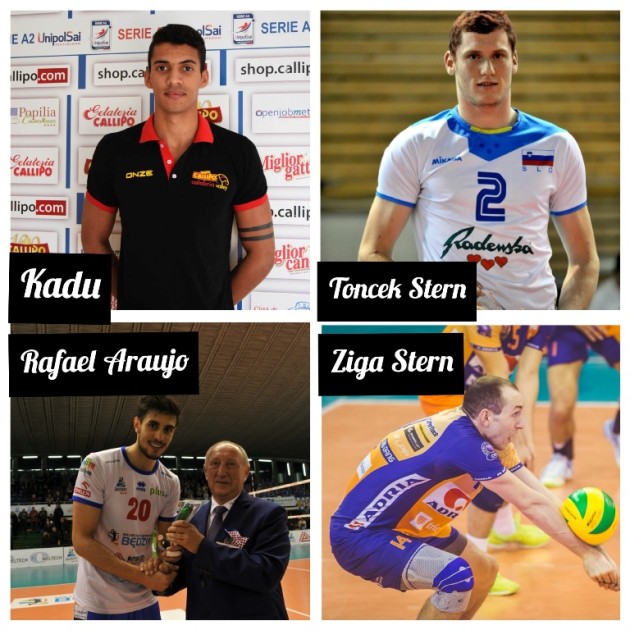 Kadu is only 22 years old. Rafael Araújo, 25. The Štern brothers, Tonček and Žiga are also in the same age group. Despite their young age, „DM7 Sports“ talents shine in the top leagues of European volleyball. Hired by Vibo Valentia, after standing out in Brazilian Superliga team Montes Claros last season, Kadu scored 17 points in the victory over Calzedonia Verona in the 10th round of the Italian Championship, six days ago. In the attack, he converted half of the balls into points. He completed good attacking performance with good reception, helping Vibo Valentia to play with more speed. Kadu returns to perform in the Italian league on Sunday (November 20), in the clash against Indexa Sora at home.

„The Italian league is very strong and every game requires a lot from us, athletes. This is very good for me, because I always want to do my best. I feel that I am evolving by each game and I am very happy to help my team to score points. We will play the next round at home and we need to take advantage of that to achieve another victory,“ says Kadu.

Another player who has done a beautiful job was the opposite Tonček Štern, who only needed a few games in the competition to show why he is considered one of the biggest bets of the new generation of Slovenian volleyball. In his first adventure abroad, the opposite has done very well in Calzedonia Verona jersey. And his good moment is directly related to two factors: the talent of the 24-year-old player and the work with Andrea Gianni, his coach in the club and also in the national team of Slovenia. This helped the young man to quickly adapt to the new environment.

“I am very happy and satisfied with my start in Verona. Every player, when he turns professional, dreams of playing in Italy. I grew up with this dream and I feel fulfilled to be able to perform it in a great team, like Verona, and next to a great coach,“ says Tonček Štern.

The outside hitter Žiga Štern from ACH Volley Ljubljana (Slovenia) already lives the expectation of the second leg of the Champions League Qualifications against Arago de Sète (France). The Slovenian side, who won the first duel 3-1, will play on the November 20 to win at least two sets to advance into main phase of the competition. The favorable scenario in the first leg was highlighted with Žiga Štern’s great performance. In just four sets, the Slovenian scored 24 points, with a 59% success rate in attack. In addition, he did very well in the reception – 58% success rate.

„We made a good start in Ljubljana and opened up a good advantage. But nothing is decided yet. The second game should be even more complicated as they play at home, before their fans. We need to stay focused and make as little as possible errors to advance in the Champions League,“ says Žiga Štern.

Rafael, world champion with Under-23 national team of Brazil, has stolen the scene in Poland. Like Kadu and Tonček Štern, the 2016/17 season is his first experience in a club outside the country after accumulating good performances throughout Sesi-SP, one of the best teams of Brazilian volleyball. In PlusLiga, packed with world stars and stars of the Polish National Team, Rafael defends the colors the MKS Będzin. His next challenge is on November 26, against Bielsko-Biała, a match valid for the 10th round of the Polish Championship. Rafael already became the most important player of his team.

„Playing in a country like Poland, which is breathing volleyball, is the wish of any professional player. It has been a great experience and learning. Everyone was very receptive since I got here. This good environment has helped me to play my best volleyball on the court. I’m working to help more and more to my team,“ says Rafael.

RUS M: Anderson – “I do not see any reason to leave Zenit”