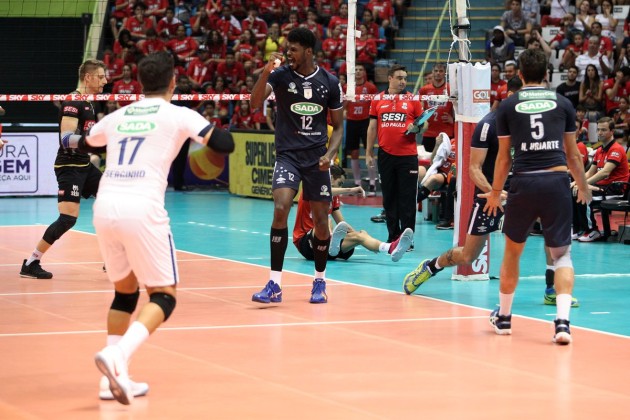 The game was held in front of the packed stands (10,019 spectators) at the Ibirapuera gymnasium, which Sesi have chosen to be their home court for the playoff finals instead of their regular ground Vila Leopoldina.

The outcome of the match could have been different knowing the fact that, after trailing 8-4, Sesi were only a point behind in the tie-break (9-8). But, their outside hitter Felipe Fonteles „Lipe“ was blocked twice in a row after which Cruzeiro got themselves a 14-11. Yoandy Leal closed the match with a kill for 15-12.

Game 2 is scheduled for May 6 and, according to the rules for this season’s playoff finals, in case Cruzeiro clinch it, they will win their fifth consecutive Superliga title, sixth overall. In case of a tie, the golden set will decide who will take the title.

Just like Sesi, Cruzeiro also changed the home ground for the finals. Instead of Riacho, they will host Sesi in Game 2 at the Estádio Jornalista Felipe Drummond, commonly known as Mineirinho, who has the capacity of 25,000 seats.

ITA M: Perugia come to a win from making the biggest success in club history

POL M: 4 Plus Liga playoff semifinals, all end with tie-break! Zaksa and Skra to fight for title