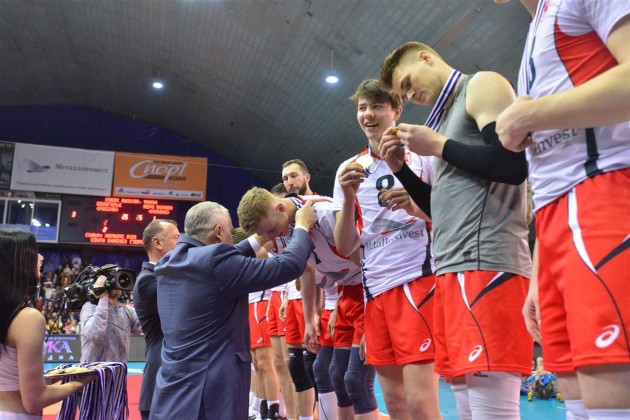 The Russian giants Belogorie Belgorod prevented another upsetting outcome in the Challenge Cup finals, the third Europan club tournament of importance, as they swept Vero Volley Monza in the second leg at home: 3-0 (27-25, 25-19, 25-19). Thus, Belogorie annulled a five-set defeat from the first match in Italy.

By beating European cup rookies Monza, Belogorie completed their collection of trophies in competitions under the CEV, adding the Challenge Cup crown to three Champions League and two CEV Cup titles. This is also the first-ever European club trophy for Slobodan Kovač in the role of a head coach. In his playing career, he was a one-time Olympic and EuroVolley winner with Serbia national team.

The packed stands at Belogorie’s Sports Palace Kosmos (5,000 spectators) watched Denis Zemchenok pouring in 17 points and Aleksandr Gutsalyuk setting up four kill blocks for the winning side. Iranian Amir Ghafour scored 13 points for Monza whose coach Fabio Soli failed to win Challenge Cup trophy for the second year in a row (the winner with Consar Ravenna in 2018).

CHN W: Lippmann, Bartsch and Slöetjes to play in China?

Winners and most prominent players of 2 just...

Drawing of Lots for opening rounds of European...