Unbeaten Poland checked in as the first semifinalists of the 2019 CEV European Men’s Volleyball Championship. 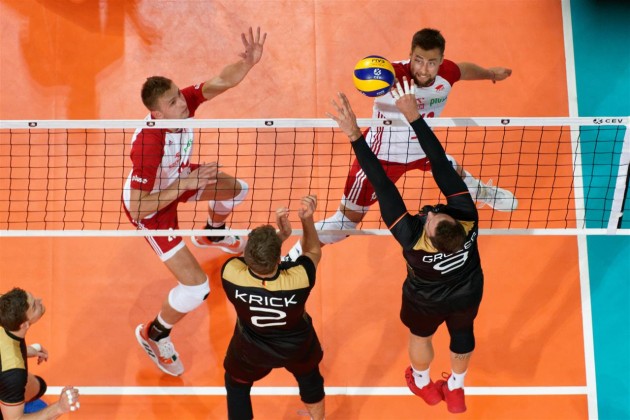 Since the first match in EuroVolley against Estonia, when they lost their only set in the tournament so far, Poland did not bump into more serious opponents than Germany, in the quarter-finals. But, even such a German team was unable to tear off at least one set from the side coached by Vital Heynen: 3-0 (25-19, 25-21, 25-18).

Winning the first set by 25-19 extended Poland’s streak of conceding 19 or fewer points to 17 sets! This streak came to an end in the following set. However, Poland remained unbeaten in the tournament with 7-0.

The stands at the Omnispor hall in the Dutch city of Apeldoorn were again filled with more than 6,000 Polish fans that saw nearly perfect attacking display of Wilfredo León: 18 points and 81% excellent attack (17/21)! Michał Kubiak was a defensive beast tonight with 79% reception (14 digs, 50% excellent).

György Grozer knows how to play important matches and he was on a high level against Poland by producing 18 points through respectable attack success rate of 62%, 16/26). But, his display was not followed properly by either of his teammates. There were no other players in double digits in the squad of the vice-champions.

EUROVOLLEY 2019 M: Defending champions are down! Slovenia eliminate Russia in front of 11,000 fans in Ljubljana