CL W: Santarelli – “I owed it to the club”; Wołosz – “I still don’t believe it happened” 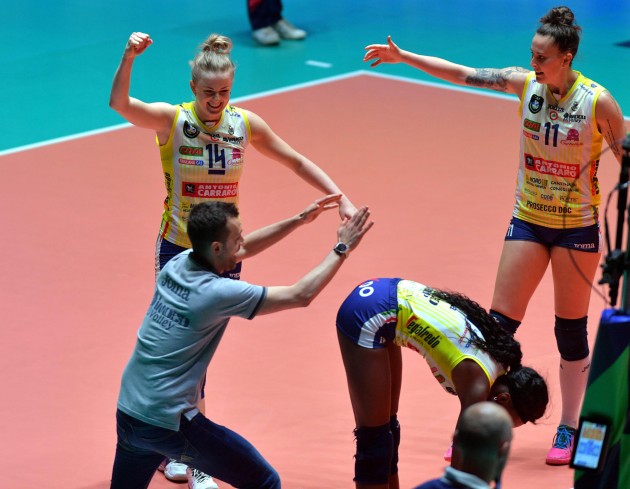 ‘The Panthers’ defeated VakıfBank İstanbul at the end of a fierce battle, winning the tie-break after recovering from 0-4 and completing the perfect season in which they won the Scudetto, the Italian Cup, and the Italian Super Cup.

“I’ve always believed in it. We lost the first set at 22, playing very badly. I told the girls that we must start playing. We threw the third set away. It was a war. Then, in the tie-break, you’re down like this… I made a change and something happened. From 0-4 to 14-10, incredible. A well-deserved and long-pursued victory. I felt the pressure is there. I made it to a semifinal and two finals, I lost them. I owed it to the club, they always believed in me. I dedicate this to my mom who I haven’t seen for too many months, she was at home alone with Covid,” said Imoco head coach Daniele Santarelli after the gold medal encounter.

“It was an incredible game between the two best teams in Europe and probably in the world. I’m so happy that after such a long journey, our team finally won this trophy, and I’m so proud of all our girls, our staff, our club, and our president. Finally, we did it! I’m super happy. I’m speechless because I still don’t believe that it happened…” stated Pole Joanna Wołosz, the captain of the Conegliano side.

CL M: Grbić – “We eliminated 3 of world’s top teams, we really deserve to be champions of Europe”