Seven more days have left until the start of the 18th edition of the FIVB World Championship for women and the USA will defend the title which they won four years ago. 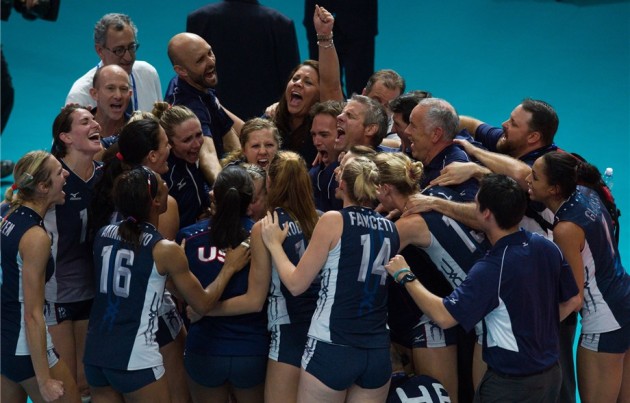 In Italy 2014, the USA won their first gold medal in this competition and seven players from today’s roster, were the part of the World Championship gold-medal team: TeTori Dixon, Rachael Adams, Foluke Akinradewo, Kimberly Hill, Jordan Larson-Burbach, Kelly Murphy and Kelsey Robinson. Kimberly Hill even was selected for the MVP of the 2014 World Championship.

The FIVB Women’s World Championship played every four years and this year it’s set for September 29 to October 20 in Japan.
The Americans begin defense of their title in Pool C when they will face Azerbaijan, Trinidad & Tobago, South Korea, Thailand and Russia.

“So far in 2018, our program appears to be on a good path,” Karch Charles Kiraly said. “We’ve had some good results, lots of players and staff have made important contributions, but ultimately those things don’t give us even one extra point at the World Championship. We’re going to have to go out and fight our hardest, every single play, to earn 25 points before the other team does.”

The team of coach Kiraly is not thinking of the past:

“We are not defending anything. We won the last World Championship, and that was nice, but that’s ancient history, and that result has no bearing on this year’s tournament. Now we are on the new and fresh process – along with many other strong teams that have high hopes – of attempting to win a totally separate tournament, the 2018 World Championship.” said American coach.