JEQ M: France and Belgium lead the pack in Saint-Jean d’Illac after straight wins over Poland and Portugal 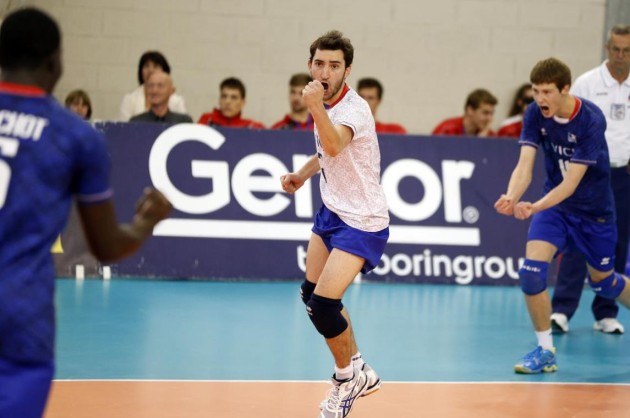 Belgium and France were almost unanimously seen as the strongest contenders for the sole ticket at stake to the make it to the World Champs scheduled for late August in Ankara and Izmir and they eventually did live up to the expectations on the first day of action in Saint-Jean d’Illac.

Belgium needed only 65 minutes to best Portugal in three sets and even though they look on a good track to book that much desired ticket to Turkey, they will be tested by much tougher rivals in the coming days.

On the other hand, France started its campaign by playing a very solid opponent, Poland, coming out from a sixth place at last year’s European Championship in Gdynia. However, Poland did not really find its way into the game and eventually lost in straight sets to the young “Bleus”. France did dominate the scene in every single fundamental while Poland was sidelined by the ankle injury suffered by Bartlomiej Grzechnik, who was forced to leave the action in the early phases of the second set.

France’s mentor Stéphane Faure was evidently pleased with the result: “We wanted to start as good as we could and though this was a real challenge, we accomplished our mission. We caught the perfect start and my players did not make any mistakes. They served well, their block was solid and their game well organized. Poland was supposed to be a very tough opponent but they could not compensate for their poor start.“

On Wednesday – for the second day of action – France plays Portugal while Belgium will take on Latvia, with Poland enjoying a rest day.

At the end of the day a special cocktail was organized in the sports hall attended by the Mayor of Saint-Jean d’Illac, Jacques Fergeau, Deputy Mayor Marie Recalde, and Baudouin Thiry, Consul of Latvia in Bordeaux.