Belgium booked an important 3:1 win (22-25, 25-19, 25-17, 25-17) against neighbor France in Pool B’s second game of the 2013 CEV European Championship – Women in Zurich. France could build on wing-spikers Helene Schleck and Elisabeth Fedele with 13 kills each. Lise Van Hecke and Els Vandesteene made the difference for Belgium with 12 points each. 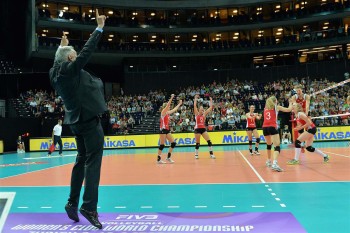 Matches between neighbors are always special, even more when a win can be very important for the qualification for the quarterfinals of the 2013 CEV European Championship – Women. The game between France and Belgium had everything needed for an exciting game.

In the first set, the teams fought on the same level. Consequently, the 3.000 spectators saw long and intensive rallies. Elisabeth Fedele did an important job for the French with her strong serves and her attacks from back-row. However, the Belgians on the other side answered with fast attacks by wing-spiker Els Vandesteene. Neither France nor Belgium got a clear lead until Christina Bauer booked an important block winner at 25-22 to offer her teammates a hard-earned 1:0 set lead.

The Belgians had to find an answer in the second set in order to prevent too much pressure by the score. Gert Vande Broek’s team found better into the game and set the pace right from the beginning. Fabrice Vial’s players felt more pressure now and had to react if they wanted to stop Belgium’s rush. They did not succeed as Belgium’s middle-blockers Laura Heyrman and Freya Aelbrecht showed up with impressive work at the net. Belgium rapidly tied the game with a 25-22 set win.

After a tough fight in the very beginning of the third set, Belgium took the lead by aggressive offensive plays and well placed smashes. The Belgian wing-spiker Laura Heyrman found holes in the French defence and scored several times. Gert Vande Broek’s players continuously increased their lead and Vial was forced to call a timeout at 11-17. It seemed as the French head coach was not satisfied at all with the performance of their players on the court. Belgium sailed to an undisputed 25-17 set win.

The Belgians kept momentum in the fourth set. The rallies became longer, but the French were obliged to focus more on defence work than on offensive plays. The French player did their best to catch up, but Belgium was too strong now. The Belgians got a comfortable eight-point lead until 19-11. France could shorten the deficit to 13-19. Nevertheless, after Gert Vande Broek’s timeout, Belgium took back control with Frauke Dirickx closing out the match at 25-17 in the fourth set.