During the summer of his 18th birthday when Philip Tuitoga accompanied a friend playing volleyball, he probably did not imagine that a few seasons later he would play in European cup semifinals in the same team with Spanish international setter Guillermo Hernan or one of the stellar player of the Serbian national team, Marko Ivovic. 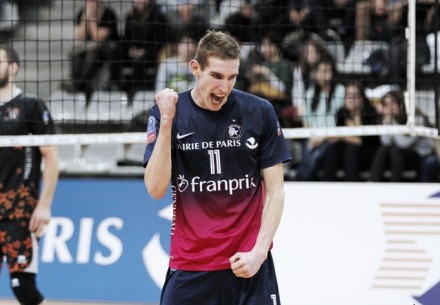 But it is what Philippe Tuitoga is about to do within a few days as France’s PARIS Volley is about to face Romania’s Tomis CONSTANTA in the 2014 CEV Volleyball Cup – Men semifinals.

From departmental level to French Ligue A in three seasons

For the PARIS Volley middle blocker all has gone through in a lightning speed.  After he had not been practicing any sport for two years after he tried handball, Philippe Tuitoga was attracted to volleyball upon his summer experience and signed his first volleyball license at age of 18 in Ivry sur Seine, his city, located near Paris.  In his first season, he alternated between the junior and the senior amateur level teams of his club.

Quickly spotted for his athleticism, he joined the club of Charenton and played in the fifth national level for two seasons.  This was already quite extraordinary for someone who had discovered the sport only three years ago.  PARIS Volley scouts realized that this was a high-potential player and did not hesitate to sign with the then 21-year-old on his first contract.  This first season in a professional structure enabled Philippe to discover the requirements of high-level volleyball and continue his improvement.

What happens when street art and sport...