Nikola Gjorgiev of PARIS Volley has received the award for the MVP of the French national league at the end of the regular season. 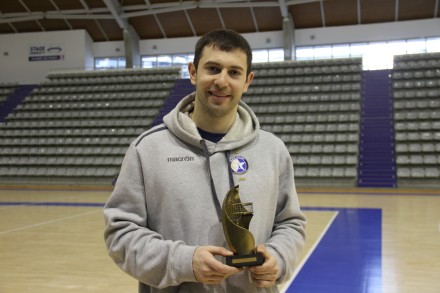 The opposite of PARIS Volley had a terrific campaign scoring as many as 608 points in 26 matches, thereby accounting for an average of 23 points per match. Gjorgiev recorded 30 points or more in three matches of the regular season and 29 in only three sets as PARIS Volley played AS CANNES lately.

Gjorgiev, who is also the star player of the Macedonian men’s national team, said: “It’s a dream come true. I did not expect to get this award right by my first season in France. I am really happy and want to thank all coaches and journalists who voted for me.” he said and added:

“I want to win a trophy with my team because Volleyball is primarily and most of all a team sport. We lost the Supercup and did not make the final of the national cup, so this is our last chance this season. TOULOUSE is really good and they have strong, experienced players. It’s going to be difficult. Saturday’s game, which we play at home, will be the most important one.”

You can see Nikola’s stat in season 2014/2015 and also check out our page to see who is the best blocker, the best attacker, the best server etc in France.

CEV CUP M: Second round of clash of titans

THE YEAR OF NGAPETH: Highlights of his...