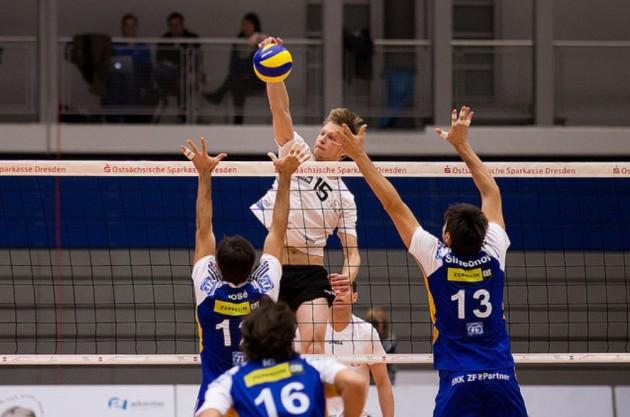 The first two sets  were one-sided, results 17:25 and 9:25 for VfB Friedrichshafen speak for themselves.

The 10-minute break after the second set helped contribute to a change of the game. In this pause coach Sven Dörendahl spoke to his men and sent them back to the field motivated. It was 16:12, but at 17:17 VC Dresdner‘s lead had melted. Until 21:22 the game was wide open. After a block it was 24:21 for the guests, who won the set 23:25.

VfB coach Ulf Quell, who represented the absent head coach Stelian Moculescu said: “We have played very well. At the beginning of the third set we were down. We must continue working to ensure that we dominate the game from start to finish.“

VC coach Sven Dörendahl: “I’m disappointed. It brings us nothing if we play only one good set. Following the disappointing first and second set, we had a better third but it does not satisfy us.“