GER M: Friedrichshafen in finals for 7th time in a row, BR Volleys turn series vs. Alpenvolleys around 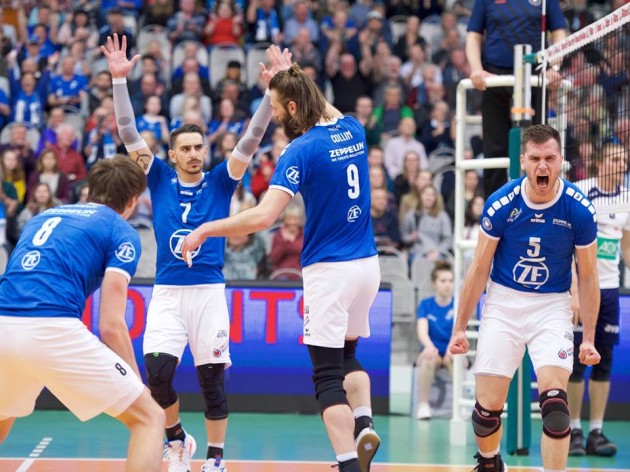 The top seed VfB Friedrichshafen won Game 3 of the 2018/19 1. Bundesliga Männer semifinals against No.4 seed SVG Lüneburg, at home, by a 3-0 (25-20, 26-24, 25-20). Thus, the team coached by Belgian Vital Heynen swept the series, remained unbeaten in the playoffs and advanced to the finals for the seventh straight season. The Pole Bartłomiej Bołądź from the winning side scored game-high 21 points while Canadian Ryan Sclater scored 12 points for Lüneburg.

In the other semifinals, the third seed Berlin Recycling Volleys made a turnaround in the series against No.2 seed Hypo Tirol Alpenvolleys Haching from 0-1 to 2-1. The team from the German capital prevailed in Game 3 by a 3-1 thanks to 15 points from American Benjamin Patch and four kill blocks apiece from his compatriot Jeffrey Jendryk II and Georg Klein. Russian Kirill Klets scored 20 points for Alpenvolleys.