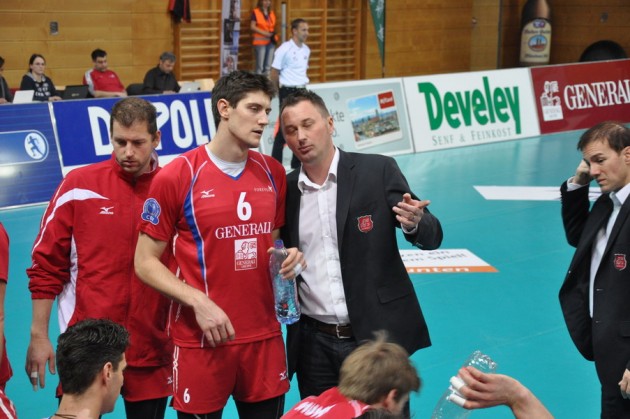 However, the Germans know that in Andreoli LATINA they have drawn arguably the strongest opponent already in the Challenge Round. So Generali doesn’t take anything for granted when hosting the Italians on Wednesday at their Sportarena.

Team captain Christian Dünnes, who won the then so-called Top Teams Cup in 2006 with Copra PIACENZA, still knows a thing or two about LATINA from his stint in Italy. “Every time you draw an Italian opponent in a European match you know that they are the favorite. And while LATINA is not of the caliber of MACERATA, CUNEO or even TRENTINO, they still are a very strong opponent. However, should we win our home match we have a good chance to go through to the next round”, he says. Jan-Willem Snippe knows LATINA even better since he already played for the club: “It will be an interesting match. I’m extremely motivated. It’s always something special to play your former club”, the Dutchman says.

Generali’s head coach Mihai Paduretu makes sure his team is on alert as he especially likes LATINA’s offensive power. “With Jakub Jarosz, Sergio Noda and Jeroen Rauwerdink they’ve got very good players.” Paduretu also has high respect for setter Pasquale Sottile. Regarding his own team, he is facing some problems: Robert Hupka and Matias Raymaekers, who didn’t play in the hard-fought win over CV MITTELDEUTSCHLAND (3:2) on Sunday, are doubtful for Wednesday’s fixture. Good for Paduretu that recent addition Matevz Kamnik coming over from Champions League competitor (and Pool play opponent) ACH Volley LJUBLJANA, is already cleared to play. Kamnik won the CEV Cup with the Slovenian club in 2007.

Paduretu is convinced that his club has drawn the toughest opponent for the Challenge Round, but welcomes the challenge: “That’s what we wanted. We want to gear up for the Playoffs of the Bundesliga”. Besides that Paduretu is also convinced “that we can reach the finals should we win against LATINA”. And last, but not least Generali’s head coach doesn’t regard the CEV Cup as a second-class European competition. “From now on the CEV Cup is an attractive competition. All teams could as well have played in the Champions League.” Setter Patrick Steuerwald, who recently signed a contract until the end of the season, echoes his coach’s opinion: “The CEV Cup is not a loser’s cup.”

In the Challenge Round the winners of the quarterfinal matches of the CEV Cup are playing the teams that missed out on the Playoffs 12 in the Champions League. The winners of that round advance to the semis.

LATINA certainly is anything but a walkover. The team from the city of 120’000 south of Rome is currently sitting in sixth place in its national league. Club president Gianrio Falivene is very happy with the options his team has. “At the start of the season we couldn’t dream about the possibility to belong to the four best clubs in either European competition. In two weeks we’ll see where we’re heading”, he says. So far LATINA has beaten CSKA SOFIA, VaLePa SASTAMALA from Finland, and Posojilnica AICH/DOB from Austria.

The winner of the match-up between UNTERHACHING and LATINA will meet Jihostroj CESKE BUDEJOVICE or Maliye Milli Piyango ANKARA in the semis.