CEV CUP M: Andreoli LATINA on its way to the semis

Andreoli LATINA looks like a serious pretender for a spot in the semifinals of the 2013 CEV Volleyball Cup. On a night with heavy snowfall in southern Germany, the Italians raced through Generali UNTERHACHING like a snowplow and claimed the first of their matches for the Challenge Round by scoring a 3:0 away win. This and other volleyball news read on Worldofvolley.com. 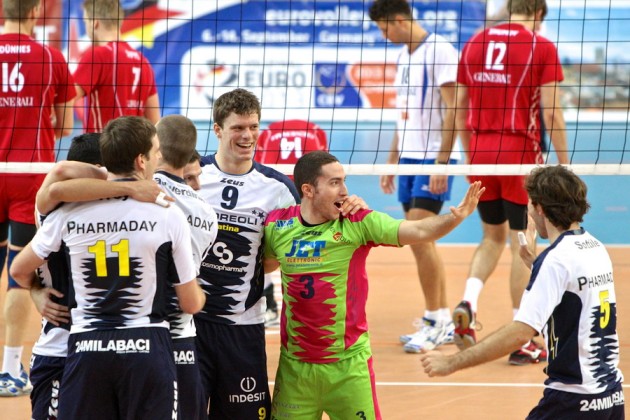 However, Andreoli’s head coach Silvano Prandi doesn’t take anything for granted. “This was only the first of two matches. Of course, it’s always better to win, but we are still far away from the semifinal”, he said after the game that took 84 minutes and saw Jeroen Rauwerdink of LATINA as the top scorer with 14 points. “We started out well”, Generali’s head coach Mihai Paduretu said, “but we couldn’t hold our level of play. Especially in defense LATINA was much better and they made the big points”. Captain Christian Dünnes was Generali’s best scorer with 10 points.

Due to heavy snowfall in Munich and its outskirts only 518 spectators made it to Generali Sportarena. Those in attendance were treated well by the hosts at first. UNTERHACHING was up 9:2 when LATINA received a yellow card for arguing. However, as it happened often in the past, Paduretu’s team suddenly lost its rhythm and showed some disturbing coordination problems in the process. Generali saw the commanding lead vanish point by point until the Italians evened the set up at 12:12 and grabbed their first lead (16:15) at the second technical time-out. From that point on it was a roller coaster ride: UNTERHACHING regained the lead again (18:17), lost it, fell behind (20:22), evened up the set (22:22), fell back again – and lost the set after 29 minutes (23-25).

The second set was a tight affair at first, but Andreoli went up 8:6 at the first technical time-out and widened the gap to four points at 12:8. All the Italians had to do was playing a solid game and wait patiently for some mistakes by the hosts. Generali was obviously lacking harmony in offense, showing a lot of misunderstandings and was sometimes irritatingly looking like a team that held one of its first practices of the current season. After the second technical time-out LATINA, seemingly without breaking too much sweat, was up 18:12 and easily stayed in the driver’s seat until – after another 23 minutes – it had won set number two as well (25-18).

UNTERHACHING obviously didn’t want to get swept out of its own arena. The hosts again showed some signs of good Volleyball like in the first set. They went up 8:5 at the first technical time-out, but again failed to hold on to a solid lead. At the second technical time-out the gap was only one point in favor of the hosts (16:15) and the lead went back and forth after that. At 23:23 and 24:24 UNTERHACHING saw glimpses of hope to somehow turn the match around. LATINA, however, just kept its cool and finished the game off with match-point number two (26-24).

ARG M: Martin Ramos – We have to work in every set