After the victories of Schwerin, Dresden and Vilsbiburg, the leading team from the scoreboard, USC consolidated its position on Sunday afternoon with 0-3 defeat in Hamburg at the last match day of the day. 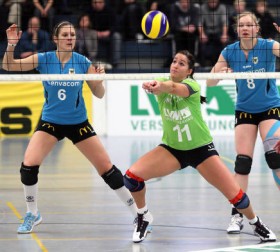 With the result 3-0 on the envacom sinsheim volleys, the fourth team on the scoreboard had to put great effort in the game, because the guests from Kraichgau had exclusively a strong fighting spirit.

At the beginning of the first set of the match, USC had the lead until the end of the intermission shake, because only the fifth rate brought the ball and won the set with the lead for 1-0.

Michaela Jelinkova was voted the most valuable player.

During the second set USC showed that they urgently wanted to win the game.

Munster led to the second technical time out with 16:10 and was finally able to obviously win the set with 25:15.

At the end of the game against Sinsheim there were plenty of impressions from the past few years to see.

Even the little guests arrived at USC during the painting of Frima Franke & Franke at their expense.

After Hana Cutura (USC) had again taken the lead for the USC, it could move back to five points (24:19).

Ultimately, the third set also went to Munster, which could thus defend the fourth.

WL M: Germany a point away from...