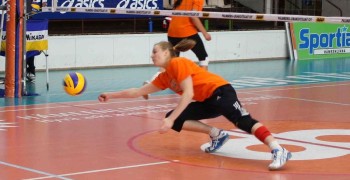 Riikka Tiilikainen came into volleyball through her brother and her father. In her home town of Porvoo she began her career at Porvoo NMKY.

With the start of high school she moved to Tampere, into town Varala, where she trained with the Junior National Team. Parallel to this, she played in the Finnish league for Vanajan Racing Club from Hämeenlinna for seven years .

During this time she was Finnish champion twice. After the end of her studies young Finnish was found in the new situation, which enabled her to go to Germany so the offer of VT Aurubis Hamburg came at the right time.

Riikka Tiilikainen expressed to that she is looking forward to the season in VT Aurubis Hamburg.

You can find related news on Transfers 2013.