On Sunday (March 4) Generali Haching will meet with Friedrichshafen. The final match begins at 15.30 h in Gerry Weber Stadium in Halle / Westfalen. Before this duel from 13 h, Roten Raben Vilsbiburg will meet with Schwerin SC. 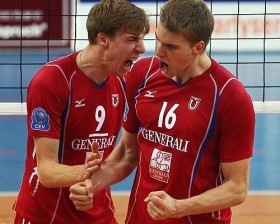 Günthör: “It is important to to feel like one in order to to play good playoff with the champion. And we have not managed that so far”, noted, the captain Max Günthör on this topic.

The coach Mihai Paduretu warns, given the recent success of his team against Friedrichshafen: “Of course we do not go for the fourth time to Halle to say: We want to finish second.

We want the title! Ultimately, as in the previous year. But in the course of the season, VfB become stronger. While have already lost the game against Kazan and Tours in the Champions League, VfB has improved tremendously. “

Golf: “VfB has enough alternatives.”
Even the temporary loss of both diagonal player and attacker Jovanovic and Venno they know how to be classified.
“First, we assume that Venno will be playing again. And even if not, they have enough alternatives, ” Berti says.

“I am betting on 3:2 for us,” Max Günthör says optimistically.

For the seventh time the cup final is being held in the Hall. Max Günthör had been in every final there. He won five of his six previous finals, twice with VfB and  three times with Haching. For Generali Haching, overall, it is the fifth participation in the Cup finals.
Even the former player of Haching, Sebastian Schwarz, emphasizes the importance of Venno in Friedrichshafen. Tille of  Haching, also says: “If Venno is fit and plays in the form as before the injury, the odds are 50:50.”