Mutual respect is the relation of two native Romanians. Mihai Paduretu: "I owe a lot to Stelian. Of such a coach much can be learned.” 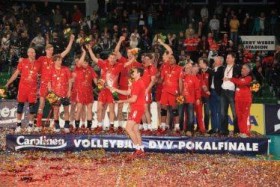 Mihai Paduretu: “I owe a lot to Stelian. Of such a coach much can be learned.”

Stelian: “Paduretu pays with much appreciation. What he has done for Haching is enormous. If I lose, then I prefer to lose against him. That gives me no much trouble, because I like him. “

Jose: “I look forward to the final – and that we win this time.”

Marcus Boehme, the middle blocker of VfB:“Haching is a diificult German enemy in general. Every team wants to make up for the defeats in the league and show that it goes the other way round. ”

Ten times VfB was in the finals of the Cup, but the last three titles went to Bavaria.

Captain Joao Jose looking back on the last year’s finals:“I look back with a bit of sadness at this game but not with anger or disappointment. Haching has dominated the game at the beginning, but we managed to change the situation. In the fifth set, we were playing with determination, but in vain.”

On the coming event, he looks confidently, but with respect for the final opponent: “If there is the final, it must be like the last one – five sets, two and a half hours of playing on a very high level. I hope it will be this year like the previous one  – but with the victory for us, although Haching this season is very well and plays consistently. The players who have come are new and strong and can solve even complicated situations well. This gives them stability. Even in stressful moments, they do not lose control – either through their acting or their emotions. I like to play against Haching because I like to play against teams that make game difficult for us. I look forward to the final and that we win this time.”