The stage is set for the first volleyball highlight in 2012. 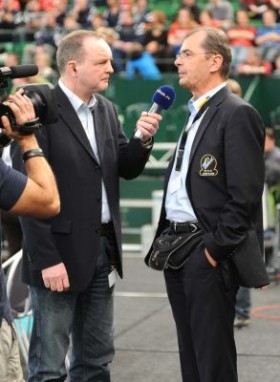 Schwerin remains in the Bundesliga after 3:1 victory over Hamburg, but lost in the Challenge Round of CEV Cup with 1:3 against Busto Arsizio (Italy). Vilsbiburg won the last year’s champions Stuttgart Smart Alliance in four sets and will remain leader of the league. Haching (1:3 against TV Bühl) and Friedrichshafen (2:3 against VC Gotha) suffered in the league one defeat. For the master from Lake of Constance the season in the Champions League was ended on Tuesday after  the defeat of 0:3 against Zenit Kazan (Russia).

– What makes your final opponent?

Moculescu (Friedrichshafen): “Haching has a compact team that in this season plays a very good volleyball. They are the first on the scoreboard and have already beaten us twice this season”.

Paduretu (Haching): “Friedrichshafen is a very professional team. It is the best club in Germany and one of the best in Europe.”

Buijs (Schwerin): “Vilsbiburg is primarily in defense a very strong team, which also has a lot of power on diagonal position. Since their playing this season is very stable, they are rightly on the first place in Bundesliga.“

Gallardo (Vilsbiburg): “Despite the young players, Schwerin is very good individually. Especially in the last matches they have shown a very consistent playing and therefore deserved the victory of 3:2.“

– What makes your own team?

Moculescu (Friedrichshafen): “We have played for three years and have not won the trophy yet. It is time that we take it home. My team has what is needed.”

Buijs (Schwerin): “The mix of young and older players who like to play volleyball.”

Gallardo (Vilsbiburg): “Our team is united. Every individual cooperates with the other. Their strong team spirit is very important now.”

Moculescu (Friedrichshafen): “As in any final, chances are 50-50. There are two teams that meet on equal terms. The form of players that day will decide.”

Paduretu (Haching): “I also believe that everything depends on the daily form.”

Gallardo (Vilsbiburg): “We have to wait until Sunday.”

GER M: Simeonov – The most important...